By Shin Hyon-hee
Published : May 26, 2017 - 18:09       Updated : May 26, 2017 - 18:18
The Moon Jae-in government on Friday gave its first approval to a civic group’s proposal to reach out to North Korea for malaria control, heralding a turnaround in Seoul’s approach to humanitarian aid that has been increasingly politicized amid military tension.

The Seoul-based Korean Sharing Movement submitted a request to the Unification Ministry early this month to make contact with North Korean officials to carry out preventive activities against malaria. 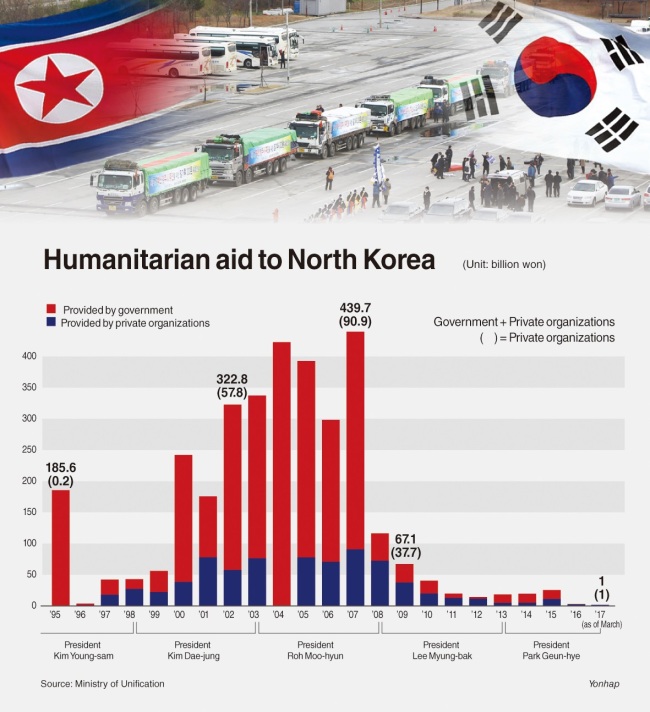 The approval was made for the first time since Jan. 6, 2016, when North Korea conducted its fourth nuclear test which brought virtually all inter-Korean exchanges to a standstill.

“The government’s position is that we will sternly respond to North Korea’s provocations, but the current severance of inter-Korean relations is undesirable in light of stability on the peninsula,” deputy ministry spokesperson Lee Eugene said at a news briefing.

“In this regard, we plan to flexibly contemplate humanitarian aid and other private exchanges within the extent that does not undermine international sanctions.”

South Korean individuals and entities are required to obtain the ministry’s approval to visit the North or communicate with its nationals.

With many North Koreans exposed to malnutrition, infectious diseases and adverse living conditions, civic groups at home and abroad have been carrying out relief programs.

But humanitarian relief has become a source of debate in line with Pyongyang’s unbridled military provocations, as critics say the communist state may siphon off any outside handouts for military and other unintended uses.

The former Park Geun-hye administration also took flak for its about-face in its own principle that humanitarian assistance should carry on regardless of political ups and downs.

Friday’s decision may signal a reinstatement of the government’s long-held humanitarian principles.

Foreign Minister nominee Kang Kyung-wha, who served in various human rights-related posts at the UN, also said Thursday that humanitarian aid should be provided apart from political consideration, calling it a “universal value of mankind.”

Last year, the government gave the green light only to Eugene Bell Foundation Korea, an international organization that specializes in providing tuberculosis medication to the impoverished country.

The KSM said it will discuss the shipment of malaria prevention goods with its North Korean counterparts via fax and email. Together with Gyeonggi Province, the group has since 2008 been undertaking joint prevention projects with North Korean authorities, dishing out fumigator trucks, diagnostic kits, mosquito nets, drugs and other supplies.

If the work proceeds smoothly, it plans to dispatch officials in mid-June to the North, including Rep. Won Hye-young of the ruling Democratic Party of Korea who co-heads the group, according to its Secretary-General Kang Young-sik.

“Malaria prevention is a project that’s necessary for both Koreas, because disease and insect pests come and go across the border, so the work should be done in the North to ensure no one contracts malaria in the border areas in the South,” Kang told The Korea Herald.

“We’ve been unable to carry out the activity for the past four years, and if this vacuum continues for a few more years, the figures would skyrocket again in both the North and South,” Kang said, adding the goods should be shipped no later than May or June, given higher risks of malaria in summer.
By Shin Hyon-hee (heeshin@heraldcorp.com)