According to a government-run information portal, irregular employees numbered 144,205, or 33.6 percent of the total workforce, at 335 public organizations as of end-March.
But Moon, who took office on May 10, appears to be talking about a broader number of irregular workers.

“When including indirect employment, about half (of public-sector positions) are irregular jobs, and they are creating an obstacle to the country’s economic growth,” he said in a meeting with workers at Incheon International Airport Corp., a key public enterprise, two days after his inauguration.

He vowed to turn all public-sector irregular jobs into regular, full-time ones by the end of his term. 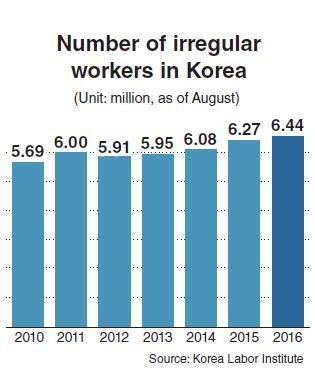 The airport operator’s head sought to be in tune with Moon’s pledge by promising to give regular status to all of its irregular employees, numbering more than 10,000, within this year.

Other public entities overseen by the government are expected to follow suit regardless of differences in their financial conditions and personnel structures.

Many private companies also feel pressured to reduce the number of workers employed on a non-regular basis.

Critics say Moon’s well-intended policy might not necessarily be beneficial for the workforce and could hurt the efficiency of the economy unless it defines irregular jobs more specifically and is backed by labor unions, which are reluctant to concede their vested rights.

A flood of demands for a quick shift to regular status, wage hikes and improvement of other working conditions might put the Moon administration to an early test of its managerial ability.

Experts agree irregular workers need to be given regular status if they do the same work for the same hours as regular employees in order to prevent the polarization of the labor market.

But it is reasonable to hire workers on a temporary basis to do auxiliary and nonpermanent work.

Job status may not matter for some people such as married women with children, who want to work part-time or under a flexible working hours system.

“Turning all irregular jobs into regular ones may result in reducing job opportunities,” said Park Ji-soon, a professor at Korea University School of Law.

Moon’s predecessor Park Geun-hye also tried to cut the number of irregular workers. But the effort was unfocused as she put top priority on fulfilling her campaign pledge to raise the country’s employment rate to 70 percent.

The employment rate rose from 59.5 percent in 2013 to 60.4 percent last year, due partly to an increase in the number of temporary and part-time jobs.

Over the cited period, irregular workers’ proportion of the total workforce edged up from 32.6 percent to 32.8 percent, far above the average of 21.9 percent for the 34-member Organization for Economic Cooperation and Development. Their number increased by nearly 500,000 to 6.44 million, according to the Korea Labor Institute, a state-funded think tank.

“The Park administration pushed up the employment rate in return for degraded job quality,” said Cho Don-moon, a professor of sociology at the Catholic University of Korea.

Experts note that a long-term approach is needed to settle the issue of irregular jobs, which is connected with corporate competitiveness.

Pressured to give regular status to more irregular employees, private companies will refrain from increasing employment as long as the labor market remains rigid.

Moon’s push for the removal of all irregular jobs in the public sector is set to increase the fiscal burden.

Nearly two-thirds of public corporations have been in the red for years and taxpayers’ money would have to be spent on turning their irregular jobs into regular ones.

Another promise by Moon to create 810,000 quality jobs in the public sector over the coming five years would also result in expanding fiscal spending.

Experts say improved treatment for irregular employees should be accompanied by concessions from regular workers and measures to eliminate the inefficiency of public organizations.

While welcoming the employment policy suggested by Moon, the country’s two umbrella labor groups have increased pressure on his administration to ditch public sector reforms, calling for the abolition of the merit pay system and the suspension of privatization and outsourcing.

During his visit to the corporation operating Incheon Airport on May 12, Moon asked workers to be patient, saying that an attempt to change too much too soon might lead to undesirable outcome.

“Both labor and management as well as the government must share burdens while trying to find a reasonable solution,” he said.

Commentators say Moon’s job initiatives might entangle the early part of his presidency if they are put into practice in an inflexible way, prompting more radical demands from labor circles.