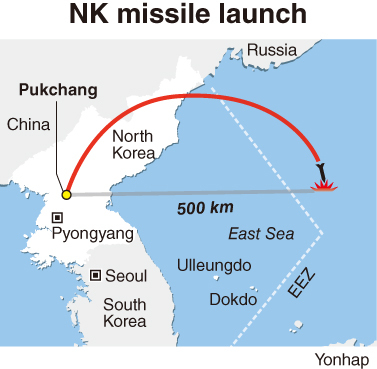 "North Korea fired an unidentified ballistic missile in the eastern direction at around 4:59 p.m. from the vicinity of Pukchang in Pyeongannam-do (South Pyeongan Province)," the Joint Chiefs of Staff said in a statement.

A JCS official said on background that it traveled at the maximum altitude of around 560 km.

He added it appears similar to Pukguksong-2, a new intermediate-range ballistic missile.

The US Pacific Command said the missile landed in the East Sea and characterized it as a "medium range" ballistic missile.

"The North American Aerospace Defense Command assessed that the missile launch from North Korea did not pose a threat to North America," Cdr. David Benham, a spokesman for the Hawaii-based PACOM, said. "We are working with our Interagency partners on a more detailed assessment. We continue to monitor North Korea's actions closely."

Moon, the South Korean president, ordered a "firm response" to the North's missile launch and also instructed the government to check if there is any possible unusual sign related to the reclusive North, the Cheong Wa Dae spokesman Park Soo-hyun.

In a statement, the South's government strongly condemned the North's behavior.

"North Korea's repeated provocation is a reckless and irresponsible act to throw cold water on expectations and aspiration for the peace and denuclearization of the Korean Peninsula that the international community has," Cho June-hyuck, the foreign ministry's spokesman, said.

The provocation came hours after Moon announced the appointment of Chung Eui-yong, a former diplomat and politician, as his national security advisor. He also nominated Kang Kyung-hwa, special advisor on policy to the UN Secretary-General Antonio Guterres, as the new foreign minister.

A week ago, the North test-fired what is believed to be an intermediate-range ballistic missile from Kusong, North Pyongan Province. The Hwasong-12 missile traveled around 700 kilometers for half an hour before splashing into the East Sea.

The launch was also seen as a test of the new South Korean administration of Moon Jae-in who took office earlier on May 10.

On April 29, the North fired a ballistic missile from a Pukchang area but it exploded in mid-air minutes after lift-off, the South Korean and US militaries announced at the time. (Yonhap)