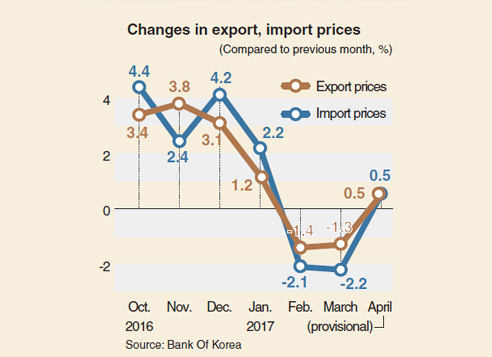 Buoyed by rising international oil prices, South Korea’s export and import prices each surged by 0.5 percent in April compared to the previous month, the Bank of Korea said Wednesday.

The provisional import price for April was 81.79 (based on the standard of 100 in 2010, in local currency terms), showing the first increase in three months.

The rise in import price, which is reflected in consumer prices, was attributed to the higher international oil prices. The price of Dubai crude -- South Korea’s benchmark -- stood at an average of $52.30 in April, up from $51.20 a month earlier.

The export price also surged for the first time in three months, reaching 85.46.

The export price for April was an 8.7 percent gain compared to a year ago. The on-year increase rate was the highest in eight years.