Moving the presidential office from inside Cheong Wa Dae, the mountainside presidential palace where all his predecessors resided and worked, has been his key campaign pledge.

And the new president confirmed the plan once again in his inauguration speech Wednesday.

“I will become a president who can wipe away the tears of the people. I will get rid of the authoritarian culture of (past) presidents and will open a new era of the ‘Gwanghwamun president,’” he said.

Details of the relocation plan are still sketchy.

But a presidential aide confirmed a rough timeline to release a blueprint by the end of this year and move by 2019.

Gwanghwamun is about 1.2 kilometers from Cheong Wa Dae, just about 10 minutes by car. If the relocation is realized, Moon will be commuting from the presidential residence every morning.

Located at the heart of central Seoul, the area is home to a handful of government ministries, including the Prime Minister’s Office and the Ministries of Education, Foreign Affairs and Culture. It is also where the US Embassy is located.

Moon is likely to take up space in the 19-story Prime Minister’s Office building, sources said. He could use the top three floors, they added.

Of course, not all those working in the area are in favor of the president as their new neighbor. Some worry heightened security could cause inconvenience.

“It would be a lot of work. The (Prime Minister’s Office) building is old and it would have to be entirely remodeled to meet the security level to house a presidential office,” said a government employee working at the building. He refused to be named.

“How will all the bodyguards protect the president when he commutes to work? Besides, it would bring so much more traffic here,” Kim Tae-hyun, an office worker in the area said.

Still, Moon seems determined to move and be closer to the people. He even said he wants to hold a “grand debate” session with ordinary citizens at the Gwanghwamun Square at times.

“I will be a warm, friendly president. On my way home after work, I will meet with the citizens and share small talk in markets,” he said in Wednesday’s address.

The liberal politician’s affection of the area is well known.

Last winter, when the nation saw a massive wave of public uprisings against former President Park Geun-hye, he was among millions of protestors who sat down on the ground at Gwanghwamun Square with a candle demanding her immediate ouster.

After his election victory was confirmed Tuesday, he also came to Gwanghwamun Square, where thousands of his supporters were waiting. 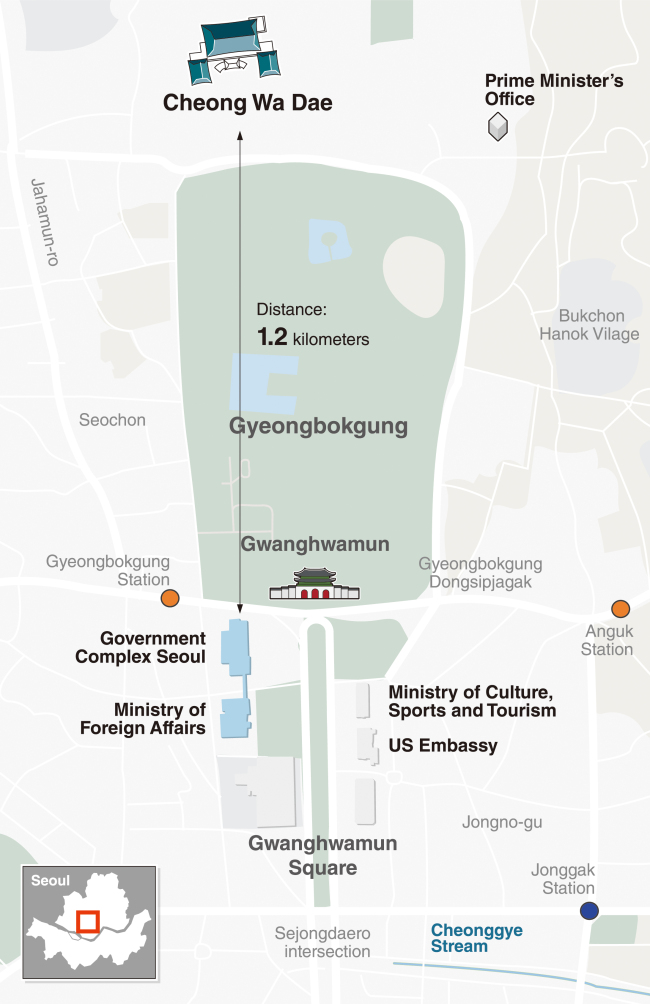 He has said the Blue House is so big that it hampers the efficiency of the presidential office.

Former President Park was criticized for her lack of communication with her own presidential staff, Cabinet and the public. An intensely private person with no family of her own, Park stayed mostly to her residence, not the official office located in a different building on the presidential compound, insisting on being briefed by email or phone.

If Moon moves his work office to Gwanghwamun, some parts of the presidential palace could be turned into a museum and a public park open to citizens, some sources said.