As opposed to the former Park Geun-hye government’s deregulatory moves, the new Moon Jae-in government is expected to tighten some regulations on the housing market, tailored to each region or situation, seeking a stabilization in the market.

This move would be read positively by tenants, while being disappointing to home owners.

Experts forecast it would be difficult to see sharp rises in housing prices for the next few years, and more likely to have a status quo.

“Sales and rental markets have been stabilizing since just last year,” said Kim Deok-rye, head of housing policy at the Korea Housing Institute. “Which means it would take some time to see major increases in prices.”

In Seoul and nearby cities, residences are forecast to show similar growth rates to last year, according to Kim. In some provincial areas, housing prices might go downhill due to an oversupply of new apartments.

“Overall, growth in housing prices is estimated to be less than future inflation rates,” Kim added.

Korea’s inflation rate stood at 1.9 percent in April, hovering around 2 percent for four straight months, according to data by the Bank of Korea.

The average housing prices for apartment prices only rose to 600 million won ($532,000) in Seoul and 319 million won nationwide as of March of 2017, showed data compiled by KB Kookmin Bank. 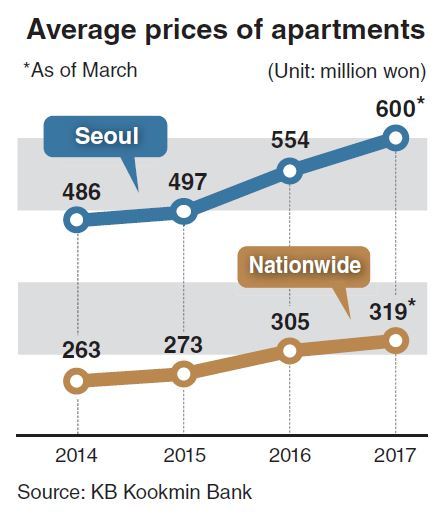 The debt-to-income and loan-to-value ratios imposed on mortgage borrowers -- representative regulations on the real estate market -- are highly likely to be kept at the current levels of 60 percent and 70 percent, respectively, as President Moon’s advisers said several times during the election campaign. No further easing in the financial regulations would be translated to no major growth in potential demand, leading to a status quo in prices.

The president pledged to provide a total of 850,000 public rental housing units for the next five years -- 170,000 units each year -- that people with lower incomes would be able to lease the houses for 10 to 30 years at lower rents and cheaper mortgage rates. The figure is a noticeable increase from 551,000 units during the former Park government.

Another key pledge is to inject 50 trillion won into urban restoration projects for up to 500 shabby towns within his term.

“The restoration projects may be a favorable factor for the market,” said Lee Nam-soo, real estate head at Shinhan Financial Investment Corp. “But if supply of redeveloped houses adds up in some areas, housing prices in the long run may decline.”

Market observers also have strong forecasts about limited growth in prices of “Jeonse” contracts -- a unique two-year lease contract here -- and monthly rents, since the Moon government is scheduled to introduce upper caps on rent in order to stave off unreasonable hikes by home owners.

On the office and investment sectors, analysts have some optimistic forecasts.

“Moon’s pledge to focus on the fourth industrial revolution and establish an ecosystem of startups as a new growth engine will boost investment in tech related industries and create new office leasing demand,” said a report by Henry Chin, head of research at CBRE Asia Pacific and Darren Krakowiak, managing director of CBRE Korea. “Reduced tension with North Korea should help attract more foreign investors to South Korea. However, the new administration is expected to increase taxes on property holdings, which is likely to increase the cost of investment.”