Conspicuously missing from the five major presidential candidates’ campaign pledges is how they would address increasing external trade pressures on the country, particularly the protectionism pursued by US President Donald Trump, upon winning next week’s election.

During their debate on economic issues last week, the audience was apparently let down by their unfocused approaches to a rising US demand for renegotiating the bilateral free trade agreement that took effect in 2012.

A day before the discussion, Trump said in an interview he would “renegotiate or terminate” the trade deal with South Korea, describing it as “horrible.”

The remark, which came along with his wish that Seoul would pay for the US missile defense system being deployed here, reminded South Koreans of his toughness on securing economic interests.

The prospect of renegotiating the trade deal with the US and China’s retaliation against Seoul for the deployment of the US anti-missile shield may dampen a recent rebound in Korea’s exports.

On the back of a recovering global economy, the country’s outbound shipments rose 24.2 percent from a year earlier to $51 billion in April, extending the streak of on-year increases to six months, according to data from the Ministry of Trade, Industry and Energy. Its exports to the US and China climbed at a slower pace of 3.9 percent and 10.2 percent, respectively.

A slump in exports, which account for about half of Korea’s gross domestic product, would hamper Asia’s fourth-largest economy from being put on path to full recovery.

A recent report by the Korea Economic Research Institute, a private think tank, predicted Korea would suffer up to $17 billion in lost exports to the US over five years if the bilateral trade accord was renegotiated, with the sectors of auto, machine and steel hit the hardest.

The country’s external earnings are also projected to fall 2.7 percent if exports to China contract 10 percent due to Beijing’s retaliatory measures and possible trade friction between the US and China, according to a report released Sunday by the Korea Institute for Industrial Economics and Trade, a state-funded think tank.

Concerns over unfriendly and uncertain external conditions were reflected in a recent survey by a local business lobby of 166 midsized firms, in which nearly 80 percent said exports would remain unchanged or decrease in 2017, compared to last year. 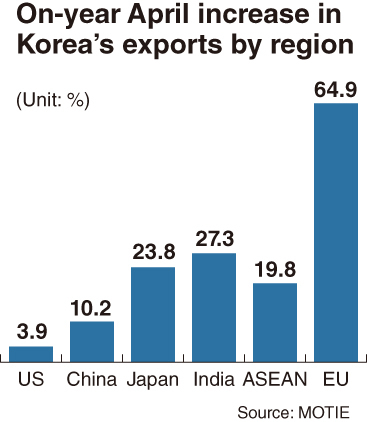 None of the presidential candidates have suggested concrete and substantial trade policies alluding to such worries.

Moon Jae-in, the candidate of the liberal Democratic Party of Korea, pledged to maintain strategic ties with the US based on a military alliance and a free trade deal. Shim Sang-jeung from the minor progressive Justice Party said she would review the impact of trade accords Korea has concluded with the US and other countries on the domestic economy and society.

Their stances seem out of touch with the urgent need to deal with trade pressures from the Trump administration.

Ahn Cheol-soo, the candidate of the centrist People’s Party, made an ambiguous pledge to pursue trade diplomacy based on free trade deals that bring a virtuous cycle with the domestic economy.

The two conservative presidential candidates -- Hong Joon-pyo from the Liberty Korea Party and Yoo Seong-min of the Bareun Party -- did not mention trade policies in their 10 major campaign pledges.

Critics have said presidential candidates should pay more attention to trade issues, which hold the key to the country’s economic survival.

Priority should be given to lessening or defusing trade pressure from the Trump administration, which has blamed the trade deal with Korea for more than doubling the US’ bilateral deficit over the five years of its implementation to $27.7 billion last year.

“Whoever wins next week’s election needs to meet President Trump as soon as possible to share understanding on the importance of the bilateral alliance and the mutual benefits from the free trade deal in a larger context,” said Choi Nam-seok, a professor at Chonbuk National University.

While South Korea went through domestic political turbulence over the past months, China and Japan have moved to ease pressures from the new US administration through their leaders’ talks with Trump.

Kang In-soo, head of the Hyundai Research Institute, a private think tank, suggested separating renegotiation on the bilateral trade deal from discussion on sharing the cost of keeping US forces here.

He said Trump’s remark on the possibility of terminating the trade accord with Korea, which has benefited both sides, was seen as part of a negotiating strategy to draw more concessions from Seoul.

According to a report released by the US International Trade Commission last year, the US might have seen its 2015 deficit with Korea at $28.3 billion expand to $44 billion without the bilateral deal.

Shipments of three major US export items -- cars, pharmaceuticals and beef -- to Korea increased from $780 million, $880 million and $580 million in 2013 to $1.68 billion, $1.12 billion and $1.04 billion last year, respectively, according to figures from the Korea International Trade Association.

Korea’s accumulated investment in the US reached $51.2 billion over the five years since the trade pact came into force, while incoming investments marked just $20.2 billion.

Some experts say Seoul needs to be more aggressive in reducing the trade imbalance with the US, as Trump is preoccupied with cutting deficits, which he sees as a major factor behind job losses in the world’s largest economy.

Ahn Se-young, a professor at Sogang University’s Graduate School of International Studies, suggested Korea offer a plan for halving its trade surplus with the US over the coming five years mainly by increasing imports of US shale gas.