Korea’s trade surplus with US under Trump down 34 percent

According to the Ministry of Commerce, Industry and Energy on Tuesday, the country’s trade surplus with the US totaled $6.03 billion from January to April. The figure is down by $3.11 billion, or 34 percent, from $9.15 billion surplus a year earlier.

Among US imports to Korea, agricultural and marine products amounted to $2.63 billion -- recording the largest increase among imported goods -- while equipment for semiconductor manufacturing increased by $1.55 billion and mineral products by $1.24 billion.

Local industry officials attribute the decline in trade surplus to US President Donald Trump’s multiple public statements that he has his sights on renegotiating or even ceasing the 5-year-old Korea-US free trade agreement.

In an interview with Reuters last week, Trump referred to the trade pact as “unacceptable” and added that his administration would seek to renegotiate the FTA following the administration’s revision of the North American Free Trade Agreement with Canada and Mexico.

“It is unacceptable, it is a horrible deal made by Hillary,” Trump said in the interview. “It’s a horrible deal, and we are going to renegotiate that deal or terminate it.” 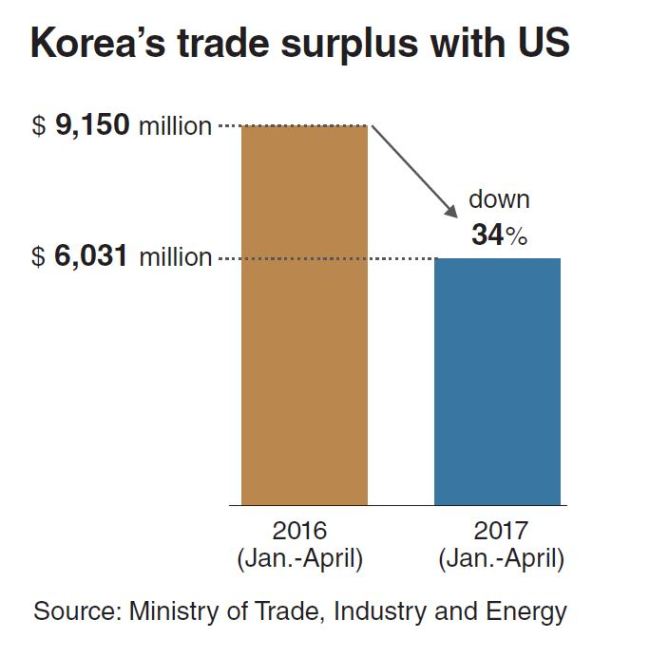 Senior lawmakers of the US Democratic Party went on to publicly denounce Trump last week, with lawmakers saying they were outraged by the president’s comments on both the anti-missile system and Washington’s future alterations of the trade deal.

House Minority Leader Nancy Pelosi said Trump had proven once again that “he’s out of his depth in the White House,” in a statement Friday, adding that the Democratic Party believes Trump is damaging the South Korea-US alliance.

Sen. Ed Markey, a member of the Senate Foreign Relations Committee’s Subcommittee on East Asian and Pacific Affairs, also chimed in over the weekend stating that the US needed to instead reaffirm and strengthen its alliance with Korea, and referred to Trump’s comments as “damaging and disrespectful rhetoric.”

Meanwhile, along with his future initiatives to alter the conditions of the Korea-US FTA, Trump stirred even more controversy with the recent declaration that South Korea should pay $1 billion for the deployment of the controversial Terminal High Altitude Aerial Defense system.

However, Korea’s Ministry of National Defense stressed that the matter was not up for renegotiation, as an agreement had already been made that the US would pay for the deployment and operation of THAAD, while Seoul provides the land and supporting infrastructure, adding that the current plan was in line with the South Korea-US Status of Forces Agreement.