By Korea Herald
Published : Apr 27, 2017 - 12:39       Updated : Apr 27, 2017 - 18:07
South Korea’s economy grew at a faster pace in the first three months of the year on the back of robust exports and stronger-than-expected investment in construction and facilities, the central bank said Thursday.

The on-year GDP growth was 2.7 percent in the first quarter, the fastest since 3.4 percent on-year growth in the second quarter of last year.

“Exports of semiconductors, machinery and equipment were in good shape, which led to more facility investment. The good weather conditions in the first quarter and the continued execution of the government budget in the public sector also helped construction show much better data,” said Chung Kyu-il, director of the BOK’s economic statistics department, at a press conference. 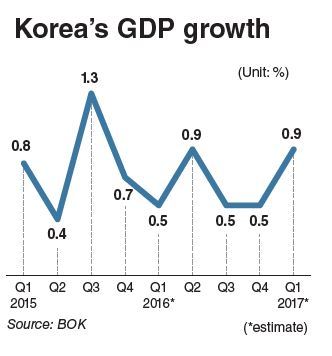 However, private consumption remained weak, growing 0.4 percent in the first quarter. The figure is slightly up from 0.2 percent expansion in the fourth quarter, but the growth was mainly supported by Koreans’ overseas consumption.

“The local consumption of nondurable goods and services is shrinking but overseas consumption by Koreans is increasing,” Chung said.

The release of the BOK’s better-than-expected economic growth data increases the likelihood that the Korean government could revise up the 2017 growth forecast from the latest projection of 2.6 percent.

Finance Minister Yoo Il-ho recently said that Korea’s GDP growth will be higher than 2.6 percent this year on strong exports, ruling out the need for extra budget. The International Monetary Fund raised the growth outlook to 2.7 percent, up by 0.1 percentage point.

However, the nation’s long-term low growth trend will persist because Korea’s heavy reliance on exports goes against the global trend of world economies centering their economic growth on domestic demand, according to Lee Geun-tae, an economist at the LGERI.

“The latest GDP growth in Korea is not based on domestic demand, which will bring down the nation’s competitiveness in the long term,” Lee told The Korea Herald.

“In the long term, Korea’s average annual economic growth will go down to 2.2 percent for the next five years.”

The Korean economy expanded 2.8 percent in 2016, according to the BOK.