The issue came to the fore again last week when presidential front-runner Moon Jae-in said in a press conference on his economic policies that he would sharply expand government outlay if he won the May 9 election.

Specifically, he pledged to raise the annual increase rate of government expenditure to 7 percent from the 3.5 percent target set by the current fiscal management plan.

If his promise is put into practice, Korea’s national budget is projected to rise from 400.5 trillion won ($351.7 billion) last year to 561.7 trillion won in 2022, the final year of a five-year presidency.

Kim Sang-jo, economics professor at Hansung University, who has been involved in drawing up Moon’s economic blueprint, argued there is a need to expand fiscal spending to help boost domestic demand amid a prolonged downturn.

He also said “reckless” infrastructure investment should be avoided.

Instead, Moon’s economic plan calls for funneling most of the expanded spending to increasing employment, mostly in the public sector, and improving education, child care, medical services, safety and the environment, to promote what he calls people-oriented growth.

His expansionary approach has been well-received by critics of the rigid adherence to fiscal balance under former President Park Geun-hye’s administration.

With household income and corporate investment stalled, preoccupation with fiscal balance has further hampered the country’s economy from pulling out of a low-growth rut.

A recent study based on fiscal data for 2000-2015 found that increased government expenditure was more effective than tax cuts in prompting growth in the country’s gross domestic product, partly because enhanced welfare programs enabled low-income households with higher propensity to consume to spend more. 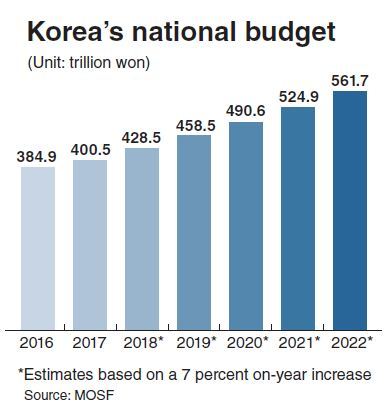 In a report released in October, the Organization for Economic Cooperation and Development suggested Korea could increase its annual budget by 8 trillion won to bolster growth without damaging its fiscal soundness.

The US Treasury Department reiterated its call for Korea to expand fiscal spending to facilitate growth in its semiannual report on currency policies of major trading partners last week.

But many experts note the proposed expansionary fiscal policy would prove ill-conceived as a means to shore up the country’s sagging growth potential.

“The problems faced by the Korean economy now, such as lowering productivity and sluggish investment, are not to be solved by simply expanding fiscal expenditure,” said Min Kyung-kuk, professor emeritus of economics at Kangwon National University.

He also said there is limited room to increase fiscal spending due to weak growth.

Yi In-sil, a professor at the Graduate School of Economics at Sogang University, described fiscal expansion as a negative policy that would only increase the burden on future generations.

Moon said the proposed increase in fiscal expenditure would be covered by a natural rise in tax revenue that is estimated to reach 50 trillion won over the next five years, a reduction in tax breaks and a cut in overlapping state-funded projects.

He suggested his government would seek to raise taxes based on public approval, if those measures proved still short of financing the envisioned fiscal expansion.

Korea’s tax-to-GDP ratio stood at 18.5 percent in 2015, compared to the OECD average of 25.1 percent in 2014. It may still prove an elusive task to gain public consensus on raising taxes, as the country’s taxation structure is so distorted that nearly half of companies and wage earners are exempt from paying taxes.

Experts see a 7 percent rise in annual fiscal expenditure as “somewhat alarming,” noting an up to 5 percent increase approximately in line with the country’s nominal growth rate would be more appropriate and do little damage to fiscal health.

Shin Min-young, a researcher at the LG Economic Research Institute, emphasized the need to implement government-funded programs in a gradual manner based on a thorough analysis of their effect.

He said that ill-conceived fiscal policies, once in practice, could hardly be reversed even if they continue to expand inefficiency.

It is also important to forge a business-friendly environment to encourage companies to increase investment and employment, they say, calling for the passage of bills designed to set up regulation-free industrial zones and promote the service sector.

In a recent survey of 371 intermediary companies, more than 60 percent said the most urgent task for the next administration would be to reinvigorate the economy. This showed that local businesses are struggling with unfavorable conditions and uncertainties at home and abroad.

During last week’s news conference, Moon said it was hard to expect corporate profits to trickle down to working families in Korea.

But economists say corporations should still be counted on to play a key role in creating more jobs, which would then lead to boosting consumption and reinvigorating the economy.