According to a Japanese newspaper on Saturday, US tech firms Apple, Google and Amazon threw their hats into the Toshiba bid. Currently, there are 10 bidders including the world’s third largest NAND flash maker Western Digital, Korean chipmaker SK hynix, Taiwanese tech firm Hon Hai and US chipmaker Broadcom.

Toshiba decided to sell its lucrative chip unit last month to make up for the loss of its US nuclear unit Westinghouse, which filed for bankruptcy protection.

Apple’s interest in bidding has gained attention as it is a key client of Toshiba and Samsung’s mobile NAND flash. If the world’s largest smartphone maker is capable of supplying NAND for its smartphones, Samsung will lose its main client.

As to the internet firms, Google and Amazon, they may want to buy NAND makers as they can make their own data servers without relying on chipmakers in the upcoming cloud and artificial intelligence era, experts said. 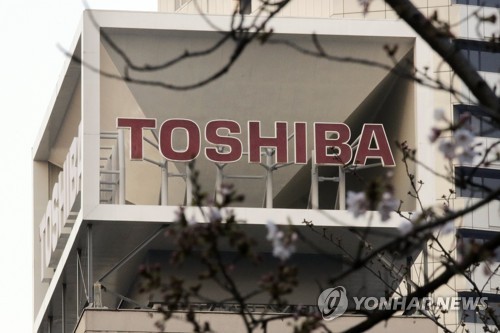 “The US tech firms -- Apple, Google and Amazon -- have become the next attractive bidders following Western Digital as Toshiba can have stable supply chains (for smartphones or data servers) from them,” an industry source told The Korea Herald.

Western Digital is currently the most attractive bidder as the US chip giant and Toshiba have long maintained a close relationship by jointly running Toshiba’s key NAND flash production base in Yokaichi.

“Then comes SK hynix, which can create synergy with Toshiba as the same chipmakers. Hon Hai is the least attractive bidder as Toshiba and the Japanese government do not want to sell the firm to Chinese companies because of the technology leak concerns,” the source added.

Asahi Shimbun and Yomiuri Shimbun said when Chinese and Taiwan companies acquire Toshiba, that could lead to Toshiba’s memory chip technology being used in military technology.

If SK acquires Toshiba, it will become the world’s largest NAND flash maker. Currently, Samsung is the largest provider with a 37 percent share, followed by Toshiba with 18 percent, Western Digital with 17 percent, Micron Technology with 10 percent and SK hynix with 9.6 percent.

However, even if SK hynix buys the chip unit, it may suffer from the winner’s curse, Daishin Securities said. SK hynix reportedly has 4 trillion won ($3.5 billion) in cash asset, much lower than the 20 trillion won of the estimated bidding price. If the firm excessively borrows money for the acquisition, it may face a financial struggle when the boom of the chip business slows down.