By Julie Kim Jackson
Published : Mar 30, 2017 - 16:37       Updated : Mar 30, 2017 - 17:57
With 27 participating car brands from around the world, the 11th Seoul Motor Show opening Friday in Kintex, Goyang, is abuzz with new features, designs and technologies geared toward enhanced performance while still being eco-friendly. Here is a brief rundown of the featured automobiles by type. 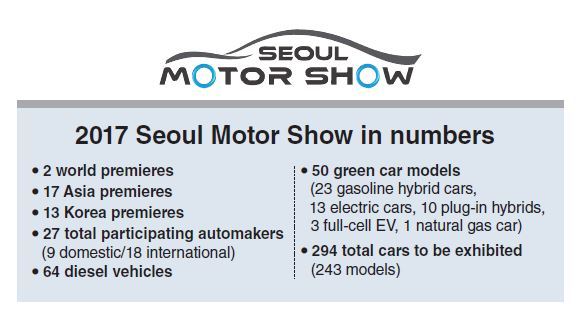 The country’s leading automaker, Hyundai Motor, introduced its Future Eco fuel-cell electric vehicle concept for the first time in Asia. The FE Concept is a fuel-cell based electric car designed to have a maximum driving range of more than 800 kilometers.

The FE Fuel Cell Concept uses a fourth-generation fuel-cell system designed to provide the same power and performance of a gasoline engine.

The fuel-cell car has a range of more than 480 kilometers, with a hydrogen tank capable of fully recharging a vehicle in roughly three minutes.

Lexus also introduced the future of fuel-cell cars with its LF-FC hydrogen fuel-cell concept car, which was revealed for the first time in Korea.

The Lexus LF-FC features an all-wheel drive fuel-cell power system, allowing for enhanced precision and road stability, according to the company.

Equipped with a holographic interface, the technology allows a driver to control the vehicle with the wave of a hand.

GM is expecting the company’s new Bolt EV to open a new era of market share for electric cars, offering a reasonably priced EV that has a driving range more than double that of some of its competitors. The Bolt has a driving range of 383 km on a single charge, the first of its kind to be introduced in the domestic market.

The Bolt EV has a starting price of 47.79 million won ($42,722), but government incentives of up to 26 million won will bring the price down to less than 22 million won, making it one of the most affordable green cars in the domestic market.

Renault Samsung Motors, the local unit of French automaker Renault SA, showed off its Twizy ultrasmall electric vehicle, which can travel 100 kilometers on a single charge through a standard household 220-volt outlet.

Having already sold more than 15,000 Twizy units across Europe, the Korean government last year lifted previous safety regulations and now allows ultra-compact vehicles to be driven on the streets except on highways.

The Hyundai Ioniq electric vehicle has returned to the spotlight, as it was named the greenest car in the United States last month, beating its global rivals the BMW i3 and the Toyota Prius Eco.

The Ioniq Electric, which is capable of traveling up to 191 kilometers on a single charge, is one of the three versions of the Ioniq series including the hybrid and the plug-in hybrid.

BMW Korea introduced its newest i3 electric vehicle series, the BMW i3 (94 ampere hour), which has increased its driving range by 50 percent compared to its predecessor, the 60 Ah.

The BMW i3 was previously equipped with 60 Ah lithium-ion battery cells, which stored roughly 21 kilowatt-hour of energy. However, the latest version of the i3 has upgraded its battery power to the newer 94 Ah cells that store up to 33 kWh with a range of roughly 200 kilometers.

The 2017 Leaf is equipped with a 30 kWh battery and has a range of roughly 172 kph. By 2020, the automaker is also expected to equip future models of its Nissan Leaf with its newly developed ProPilot autonomous driving technology.

With a combined fuel economy of 16.2 kilometers per liter, the new Hybrid is looking to further expand the company’s presence in the domestic green car market following its completion of the Hyundai Ioniq eco-friendly car series.

The NSX is equipped with the company’s pioneering hydrogen fuel cell car capable of driving 589 km, the longest distance for a zero-emission vehicle with a single charge.

The sports hybrid can output up to 573 horsepower and reach from zero to 100 kph in roughly three seconds.

Lexus presented its new premium hybrid LC 500h, a new generation of the company’s signature coupe line, for the first time in Korea.

The company is highlighting not only its luxurious sports car design, but also its speed. The luxury hybrid model is equipped with 10 speed automatic transmission, 471 horsepower and can go from zero to 100 kph in roughly 4 seconds.

Mercedes-Benz Korea CEO Dimitris Psillakis highlighted the company’s forward leap into the hybrid car industry, in the longest-ever presentation in the history of the Seoul Motor Show.

Focusing on the concept of CASE, which stands for connectivity, autonomous, shared service and electric drive, the company unveiled the new Mercedes-AMG E63 S 4Matic for its Asia premiere, and the C 350 e and the GLC 350 e 4Matic hybrids for the first time in Korea.

“Who said a green car cannot zap from zero to 100 kph in less than three seconds?” Psillakis asked, referring to Benz’s new Mercedes-AMG GT concept car, with an output of more than 800 horsepower.

For the first time in Korea, Toyota Motor introduced its Prius Prime plug-in hybrid and it is roughly 60 percent more fuel efficient than the model’s previous hybrid version.

“The sales of diesels have gone down, while sales of hybrids have gone up,” said Yoshida Akihisa, president and CEO of Toyota Motor. “The automobile industry has experience a paradigm change ... and that change is to smart hybrids.”

Max Burger, president of MAN Truck & Bus Korea, announced that the company is slated to launch compressed natural gas local buses and 28 double-deckers to various transportation operators in Gyeonggi Province. Burger added that the company expects to see its green buses hitting the streets of Korea by the end of the year.

The Korea Environment Corp. is also participating in the Seoul Motor Show for the first time in an effort to promote the government’s electric vehicle supply policy, as well as subsidy benefits and the expansion of EV charging stations nationwide.