Reshoring not yet an option for most Korean firms

Only 30 companies have returned home since Korea enacted a special law on support for reshoring firms four years ago. In a recent survey, half of them said they were not satisfied with government support provided since their return. Only 23.3 percent expressed satisfaction.
According to a report released by the Korea Economic Research Institute early this month, 11,953 Korean enterprises have gone offshore as of June 2016, hiring nearly 3.4 million workers in their host countries.

Of the total, 5,781 were manufacturing companies and the number of local people employed by them stood at 2.86 million. 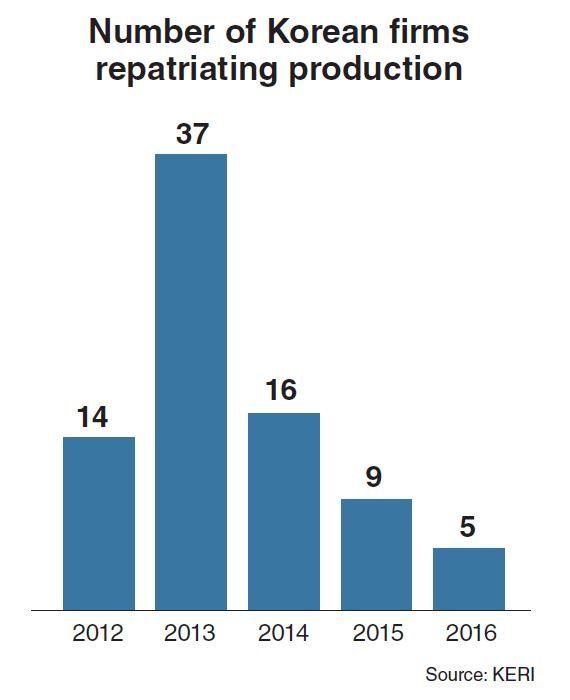 If about 10 percent of the manufacturing firms bring their overseas production back to Korea, nearly 290,000 jobs would be created in the country, the report said, suggesting such a move could get more than 60 percent of jobless Korean youths into the labor force.

This forecast may give little consideration to the wage differences between Korea and other developing countries where they run factories. But it has still renewed attention to the need to step up the reshoring effort as the unemployment problem is deteriorating here.

Asia’s fourth-largest economy saw its unemployment rate rise to 5 percent in February, the highest since January 2010, according to recent data from Statistics Korea. The figure for young people aged 15-29 reached 12.3 percent last month, down slightly from a record high of 12.5 percent tallied a year earlier, but up sharply from January’s 8.6 percent.

The number of jobless people in February amounted to an all-time high of 1.35 million on a seasonally adjusted basis.

The sluggish performance of the manufacturing sector, which accounts for one-fifth of the country’s employment, is a main drag on the local job market.

The number of new jobs offered by manufacturing businesses decreased by 92,000 in February from a year earlier, extending its losing streak to eight straight months.

Local manufacturers newly employed about 150,000 workers every month through 2015, but the figure dropped to a mere 20,000 in June last year before posting the first negative growth in more than four years the following month.

The manufacturing sector is expected to continue to shed jobs this year as the restructuring of companies saddled with overcapacity and heavy debt, including shipbuilders, is under way.

A special law enacted in 2013 to induce Korean companies to move their manufacturing home has proved insufficient and ineffective.

As of February, investment by the 30 manufacturing firms that have since returned home remained at 159.7 billion won ($141.7 million), with the number of workers hired by them at less than 2,000.

The lackluster record is in sharp contrast to the impressive results of reshoring policies pushed by the US, Japan and other advanced economies over the past years.

The US saw companies returning home create 67,000 jobs in 2015, more than offsetting the 60,000 jobs lost by manufacturers moving production abroad. This reshoring trend is expected to accelerate during the presidency of Donald Trump, who has pledged to drastically cut corporate taxes and impose hefty border taxes.

Japan has also seen a growing number of manufacturers, including large high-tech firms, bring back their overseas operations, with provincial governments competitively offering large amounts of subsidies for companies making a U-turn.

“In addition to tax and other short-term incentives, measures should be taken to strengthen legal and institutional foundations to prompt more Korean companies to reshore their manufacturing,” said Lee Hang-ku, a researcher at the Korea Institute for Industrial Economics & Trade.

Many manufacturing firms that have opted to return home are bothered by the discrepancy between the law on support for reshoring and existing regulations, and the overlapping work among government agencies.

The KERI report said the country should enhance a business-friendly environment by drastically removing regulations, improving the flexibility of labor markets and curbing wage increases to facilitate the reshoring of companies particularly in the sectors that create more jobs and added value.

It called on the government to provide the support package to large and intermediary as well as small and mid-sized firms and those seeking to build factories in the vicinities of Seoul rather than in other provincial areas. The report said there is the possibility that many companies, which face a limit to taking advantages of low wages in developing countries, will choose to increase domestic investment and bring back overseas operations if the support system becomes more effective and consistent.