About 200 special operations forces joined the one-day drill in the compound of the Army's 2nd Operational Command in Daegu, 302 kilometers south of Seoul, according to the Army. 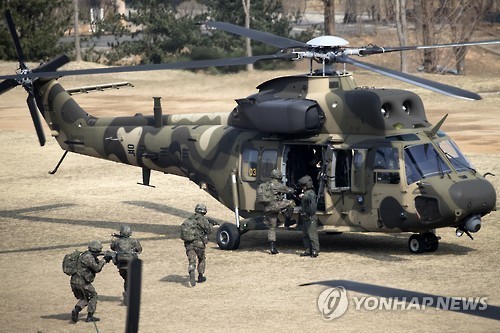 Under a scenario of the North Korean military carrying out terrorist assaults on key South Korean facilities, the special forces were drilled to relocate using choppers to search and decimate enemy forces, the Army said.

It also involved refueling operations for the military helicopters, a mission which is crucial when a battle continues for a prolonged period of time.

"The latest exercise was focused on verifying our preparedness to dispatch a commando brigade to the place of an enemy attack in order to preoccupy the site and terminate the battle," the 2nd Operational Command chief Gen. Park Chan-ju said.

The US Army forces carried out the exercise last Wednesday at Camp Stanley in Euijeongbu, just north of Seoul, according to the infantry division.

To avoid detection, North Korea is known to be keen on building underground military facilities and are presumed to have around 6,000 to 8,000 of such structures, a military journal issued in 2015 reported.

The US Forces Korea has been making sophisticated maps of underground military facilities in North Korea to counter North Korea's military threats.

It has also been running an education program named "Underground Facility" for senior South Korean and American military officers to share information on North Korea's underground facilities since 2007. (Yonhap)