By Sohn Ji-young
Published : Mar 13, 2017 - 15:27       Updated : Mar 13, 2017 - 22:44
Naver will debut Tuesday its web browser Whale, which the company has been developing for the past six years to challenge the dominance of the widely-used Internet Explorer and Google Chrome browsers.

Naver, the operator of South Korea’s largest portal website, said it will release an open beta version of its Whale browser for PCs, following a series of closed beta tests that have been ongoing since last year.

The Whale browser for Windows will become available from Tuesday, Naver said. The firm will introduce a Mac PC version and a mobile version of the browser by the year’s end, a Naver spokesperson told The Korea Herald. 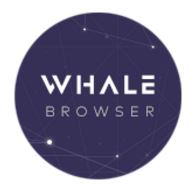 Since 2011, Naver has been developing Whale based on Chromium -- an open-source web browser project that provides the programming code for Google Chrome to the public. Given this, Whale is compatible with Chrome apps.

Some of Whale’s standout features include an “omnitasking” feature -- which allows users to divide the browser screen into two so that users can surf multiple websites at once -- as well as a quick search and translation function.

By dragging a certain word within the browser, users can conduct a “quick search” of the word and immediately view the results in a pop-up window. Whale also connects to Naver’s artificially intelligent translation app Papago to translate foreign languages including English and Chinese into Korean.

Whale also offers a voice recognition function that will process spoken commands, as well as a function that automatically reads the text on a webpage out loud for users.

Once launched, Naver’s Whale is set to compete with foreign browsers in Korea including Microsoft’s Internet Explorer and Google Chrome.

While Google Chrome dominates most parts of the world with a market share of close to 50 percent, Internet Explorer still leads the Korean PC web browser segment.

In the first half of 2016, around 88 percent of PC users in Korea used Internet Explorer, followed by Google Chrome at 6.8 percent and Firefox at 2.2 percent, according to data from the Korea Internet & Security Agency.