According to business watchers, a plausible scenario for the Samsung affiliates is to operate separately but come together under three main pillars to minimize the power vacuum and confusion with the disbandment of the Corporate Strategy Office and the arrest of their de facto leader Lee Jae-yong for his alleged involvement in a presidential scandal. 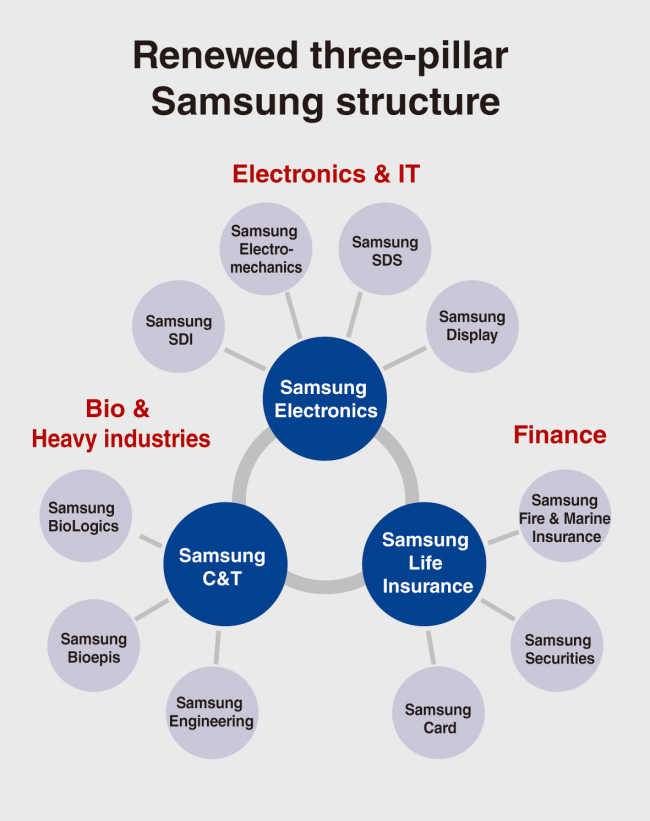 On Tuesday, Samsung Group announced the group would shut down the Corporate Strategy Office better known as the future strategy office, along with other reform measures to stave off further political implications of the group’s operation.

The office that was comprised of around 200 executives and employees from affiliates had served as a central planning office for South Korea’s largest conglomerate since 1959.

It was often criticized by affiliates for its top-down decision-making system, but also recognized for its speedy and efficient operational management of the country’s largest conglomerate.

Now, the affiliates are most likely to be spearheaded by the three pillars including Samsung Electronics, the flagship business of the group, Samsung Life Insurance and Samsung C&T, according to watchers, in consideration of the companies’ significance and performance. The three are market leaders in the electronics, insurance and construction market, respectively.

Some industry sources forecast that the electronics unit would become more powerful through the renewed system, considering its size and market influence.

“Except for Samsung Electronics, many Samsung affiliates are faring ill,” said an industry official.

“Affiliates with poor performances would have to rely more on the major units, but how much support or cooperation can be made seems uncertain,” he said.

Samsung Electronics has its own issue of governance restructuring in relation to its Vice Chairman Lee Jae-yong’s inheritance process. A plan to separate the electronics unit into an operating and a holding company has been reviewed upon the request of its shareholder Eliott Management, but this is likely to be put off. The company is scheduled to hold a shareholders’ meeting on March 24, but the plan is not on the agenda, according to news reports.

Affiliates in the red, such as Samsung Heavy Industries, is now without the group’s support, leaving them to seek ways to stand on their own feet. Except for the new biopharmaceutial units -- Samsung BioLogics and Bioepis -- growth prospects for the heavy industries units remain bleak.

“The companies will have to find effective ways to communicate and seek measures to create synergy under the new system, which will take quite some time,” said Park Ju-gun, the head of research firm CEO Score. “However, it is desirable to see each affiliate and subsidiary run by their own board of directors, which is, in fact, common sense.”

Some in the business community showed concerns about Samsung affecting the Korean labor market.

“Samsung has been hiring more than 10,000 employees every year on a group level, providing recruitment guidelines for its subsidiaries on socially vulnerable classes,” said an official at the Korea Chamber of Commerce & Industry. “It will not be easy for the Samsung affiliates to maintain their recruitment size if they start hiring independently to make ends meet.”