If they do, it will be a relief for Asia’s fourth-largest economy, whose exports plunged 5.9 percent on-year in 2016 and 7.9 percent in 2015, the country’s first two straight years of decline.
Export data for the first several weeks of the year suggested a rosy start.

In the first 20 days of February, exports soared 26.2 percent from a year ago, according to the Korea Customs Service on Tuesday. It was backed by strong performance in semiconductors, petrochemical products and automobiles, which also supported January’s 11 percent on-year growth.

The difference between the lowest and highest forecast -- about one week’s worth of exports -- is mainly due to different projections for oil prices, exchanges rates and the recovery of the world economy.

The highest forecast of $519 billion is still the lowest since 2011, barring last year.

The Ministry of Trade, Industry and Energy offers the lowest forecast of 2.9 percent growth on-year to reach $510 billion this year. The ministry, in its estimate, cited the International Monetary Fund, which said in October 2016 that the world economy and global trade would grow 3.4 percent and 3.8 percent from the previous year, respectively.

The highest forecast came from the private Hyundai Economic Research Institute which suggested a 4.8 percent growth after revising it up from 3.8 percent.

“We revised up the forecast because of a recovery in the global economy and a pickup in trade in major exporting countries in the last two months of 2016,” said Baek Da-mi, a senior researcher at the organization.

The government-backed Korea Trade-Investment Promotion Agency projected a 3.4 percent rise from 2016 to $512.5 billion, while the Korea International Trade Association predicted in November 2016 the country’s exports would grow 3.9 percent to reach $516.5 billion from $497 billion in 2016.

According to a survey of 18 economic experts by the Korea Development Institute at the end of January, exports will increase about 4.6 percent this year. The KDI said in a report earlier this month that despite uncertainty surrounding the US Trump administration’s policy direction, it will be possible for exports to achieve a mid-4 percent growth, as the global economy is recovering.

Better-than-expected exports figures in January and February have raised hopes for an upward revision of their forecast, but government officials say that it is too early to tell. 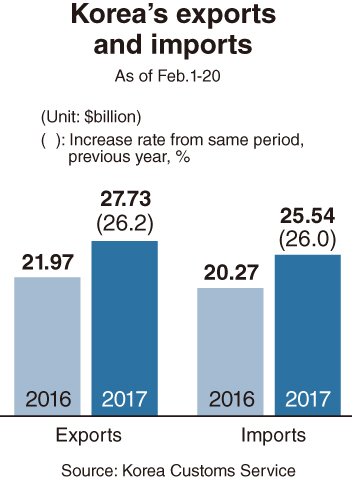 Lee Joo-yeol, governor of the Bank of Korea, told reporters that US protectionism and the UK’s exit from the EU are the biggest risks posed to the global economy. “It wasn’t unexpected that the US administration would take policies driven by protectionism but it is executing campaign pledges faster than expected.”

Joo Hyung-hwan, minister of trade, industry and energy, told reporters on Jan. 31 that “Exports would grow this year unless something unexpected happens, and the global economy and trade have been improving. ... But it is too early to revise the target because there still remain risks from growing protectionism.”

In addition to protectionism, a political row with China over Seoul’s decision to deploy the US’ Terminal High Altitude Area Defense, an anti-missile system, here and fluctuating exchange rates pose downward risks for South Korea’s exports, Baek at HRI said.

This means that while the first half of 2017 -- especially the first quarter -- may see a jump in exports, things will slow down in the second half of the year. The Export-Import Bank of Korea said exports are expected to grow around 10 percent in the first quarter of this year without giving a full-year forecast.

Kim Yoon-zi, a research fellow at the bank told The Korea Herald that the growth is mainly due to a base effect and unit prices increase for some export items.

“Furthermore, since exports grew in the last two months of 2016, we will have a higher base,” Kim said, warning that growth rates, therefore, will probably become smaller in the second of the year.

“Also, an increase in exports in the first few weeks are partly backed by price increases for display products, semiconductors and petrochemicals and petroleum, but we cannot expect the price to continue to go up for a long time.”

Economists recommend making improvements in the productivity of South Korea’s major industries rather than relying entirely on external factors to drive growth.

“(South Korea) should take advantage of the improved trade environment and put efforts into restructuring major industries such as shipbuilding, shipping, and steelmaking,” said Sung Tae-yun, an economics professor at Yonsei University.

Sung’s view was echoed by Mun Byung-ki, a senior researcher at KITA. “In order to boost exports in the future, South Korea needs to revamp its export structure to include new industries that will lead the fourth industrial revolution such as electric cars and solar energy.” Mun said. “We also need to utilize existing free trade deals that have not been used much.”