Over the past decades, prosecutors have regularly targeted the head of Korea’s biggest and most powerful family-controlled conglomerate for corporate misbehavior.

However, neither Lee Kun-hee, the bedridden chairman of Samsung Electronics, nor his father Lee Byung-chull, Samsung’s founding chairman, were ever arrested for their wrongdoings. 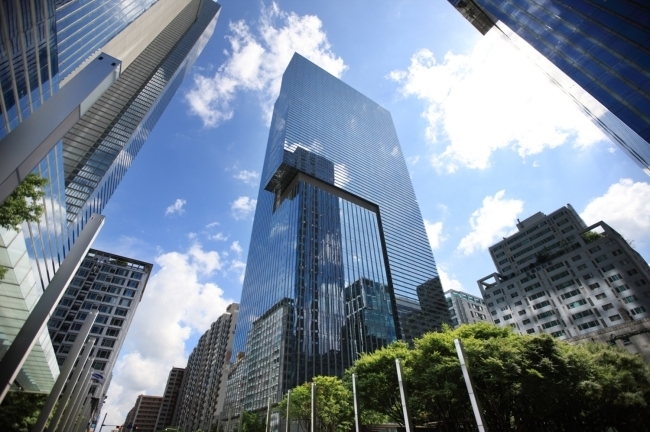 The unprecedented arrest of Lee Jae-yong has brought to public attention memories of former scandals and probes that have involved Samsung and its former leaders.

Samsung started off in 1938 as a small trading company in Daegu, Korea, selling dried Korean fish, vegetables and fruit to China.

The founding chairman later established a sugar and flour refinery, Cheil Jedang, in 1953, and Samsung eventually diversified its business into the chemicals, semiconductor and electronics sectors.

Samsung’s first-ever involvement in a public scandal came in 1966, when the Samsung-owned Korea Fertilizer Co. was found to have illegally smuggled 55 tons of saccharine by disguising it as construction materials.

At the time, Samsung’s founding Chairman Lee Byung-chull came under legal scrutiny for orchestrating such activities as well as his alleged backdoor ties to the government then led by President Park Chung-hee.

Lee Byung-chull avoided a summons by the prosecution, but later had to turn over Korea Fertilizer to the state. He also stepped down from his post and passed on his role to his first son, Lee Maeng-hee.

Later, Lee Byung-chull’s third son Lee Kun-hee would step up as the  successor to the group’s businesses. During his term, the second chairman also faced multiple investigations for Samsung’s involvement in political and business scandals, though he was never arrested. 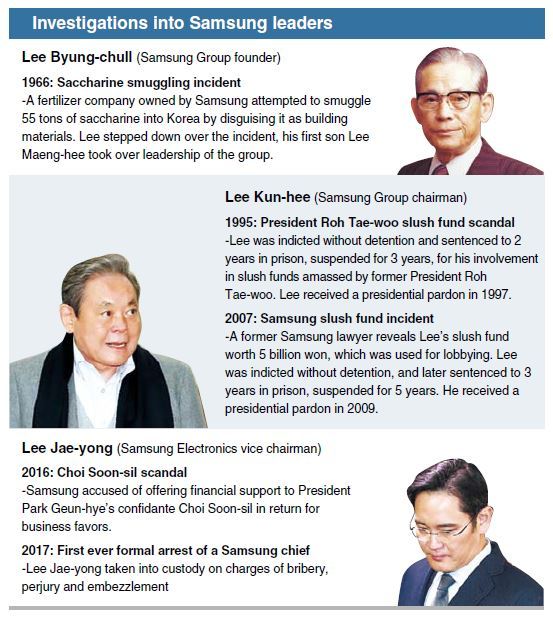 In 1995, Lee Kun-hee was summoned alongside the heads of other Korean conglomerates for Samsung's contribution to a slush fund run by former President Roh Tae-woo. In 1996, Lee was indicted without detention, sentenced to two years in prison and suspended for three years. However, he was freed of all charges through a presidential pardon the following year.

The Samsung Electronics chairman came under the prosecution’s scrutiny again in 2005 in the so-called “X-file Scandal.” A recording file released by the media had revealed that Samsung executives had offered bribes to politicians and prosecutors, presumably in return for business favors.

At the time, Lee Kun-hee was in the US and got through the incident by answering questions from the prosecution via paper. He was found not guilty and made an 800 billion won ($698 million) contribution to society after the incident.

In 2007, Samsung again faced a probe after whistle-blower Kim Yong-chul, the former top legal affairs officer at the conglomerate, testified that he was ordered by the chairman to manage a 5 billion won slush fund used to lobby state officials.

A special prosecution team was assembled and Lee Kun-hee as well as his son Lee Jae-yong, a senior vice president of Samsung Electronics at the time, were investigated for illegal stock transfers involving an affiliate.

The junior Lee was questioned, but not indicted while the senior Lee was indicted without detention for embezzlement and tax evasion. In 2008, Lee Kun-hee announced a reform agenda to improve transparency at the group and stepped down from the group’s top management.

Lee Kun-hee was sentenced to three years in jail and suspended for five years. He was freed from all charges through a presidential pardon in 2009.

After Lee Kun-hee fell ill due to a sudden heart attack in 2014, his son Lee Jae-yong took over leadership of the group as the heir apparent to the Samsung business empire.

In 2016, Samsung, alongside a slew of other conglomerates, became mired in a political scandal involving Choi Soon-sil, a close friend of President Park Geun-hye who was impeached by the parliament.

A special prosecutor team has been investigating whether the Samsung Electronics vice chairman provided up to 43 billion won to Choi in exchange for the government’s backing of a controversial merger between two Samsung units.

The Seoul Central District Court had initially rejected an arrest warrant due to insufficient evidence. However, the special prosecutor team managed to convince the court on the need for the warrant in its second attempt, leading to the first-ever arrest of a Samsung chief in 79 years.