Despite still lagging severely behind the Chinese, US and European markets, the local hybrid and electric market sold a total of 68,774 eco-friendly cars last year, compared to 41,956 the previous year. The increase was the highest proportional rise worldwide.

Sales of hybrid cars in Korea more than doubled last June, including 6,215 units of Korean-made hybrid cars -- up 140 percent from the previous month. 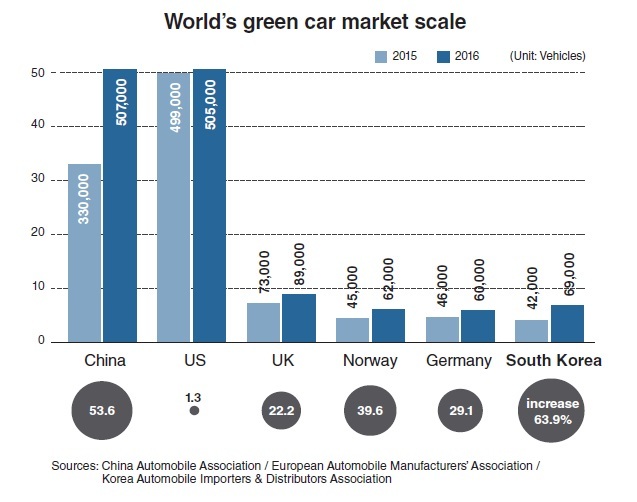 The domestic growth in 2016 was driven by Kia’s Niro and the Hyundai Ioniq. By the end of the year, Kia Motors released 18,710 Niro units in Korea, making it the country’s most popular eco-friendly model. Niro accounted for 52 percent of Korean hybrid sales in June.

The first half of 2016 also saw the Korean market for green car sales surpass Germany, formerly the largest producer of green vehicles in Europe.

Alongside Korea’s tremendous green car growth, the world’s major car markets including China, the US, UK and Germany all experienced an increase in eco-friendly car sales in 2016.

China, the world’s largest automobile market, has outpaced the US to become the world’s No. 1 seller of eco-friendly cars. According to the China Automobile Manufacturers Association, sales of eco vehicles rose 53.6 percent last year to 507,000 units, compared to 330,000 in 2015.

Despite sales of 505,284 units last year, the US hybrid and electric car market only grew 1.3 percent year-on-year.

According to the European Automobile Association, sales of eco-friendly cars in major European countries rose with a combined average of 20.3 percent. Norway saw the highest spike in the continent with 39.6 percent, followed by Germany with a 29.1 percent increase last year.

Britain grew by 22.2 percent, surpassing France to become the No. 1 eco-friendly car market in Europe.