[Superrich] After acquittal, Nexon founder sets out for new future

According to The Superrich Team’s “Korea’s Richest 100,” Kim has 2 trillion won ($1.7 billion) worth of assets through his ownership of unlisted companies. He ranks 12th as of Jan. 30 on the list.

Kim does not own any share of the listed firms, but is the largest shareholder of Nexon’s unlisted holding company NXC with 48.5 percent of shares. When standardized by total ownership interest, his shares are worth approximately 2.7 trillion won.

Adding the 21.15 percent of shares held by his wife, director Yoo Jung-hyun, Kim owns 69.65 percent of the total shares. Her assets standardized by total ownership interest are worth at least 900.9 billion won.

Nexon Group has a vertical management structure with Kim at the center. NXC, whose ownership is dominated by Kim, exerts its influence over the other subsidiaries. Under NXC is the Japanese corporation of Nexon, followed by Nexon Korea.

Kim’s wife has been involved in the business since the establishment of Nexon in 1994, and has played a significant role in its development as the director of the headquarters’ management support team. Not much information has been revealed about Yoo even within the company and thus, she is known to have a more secluded type of authority than her husband.

Kim met Yoo during his freshman year at Seoul National University, and the couple has two daughters.

Kim does not appear upfront in the management, but as the largest shareholder, he is seen to have an actual influence over the company. Recently, he was implicated in the Jin Kyung-joon scandal, and had faced the biggest challenge since the company’s establishment as he went through several prosecution investigations.
Kim was accused of providing free shares and overseas traveling fees to Jin, a former prosecutor and a fellow colleague of Kim’s from SNU class of 1986. Kim was pronounced innocent on the first trial that took place on Dec. 13 citing lack of evidence being linked to business favors. But he faces an appeal.

Jin was sent to trial for receiving 900 million won worth of monetary benefits including funds to purchase the share of Nexon Japan, a Genesis car, and overseas travels. The court decided that the shares and traveling fees that Jin received from Nexon were not for the purpose of bribery.

The industry sees that Nexon will turn towards aggressive investments in order to regain its competence in the global gaming industry after Kim’s long trial.

Kim is indeed well-known as the “master of investment” as he enlarged Nexon through merge and acquisition strategies. Through NXC’s investment-focused subsidiary NXMH, Kim took over the online Lego trading website Bricklink in 2013, and in the same year, he also took over Norway’s global baby products enterprise Stokke. In August 2015, he also invested in the social commerce enterprise WeMap through NXC. 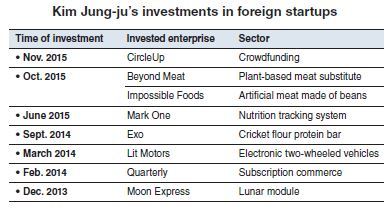 Also, he has partnered with American venture investment firm Collborative Fund since 2014. The fund has collected $33 million worth of capital to invest into various startups. Kim has invested in diverse sectors including the electronic car industry, a lunar module company and four future food companies. In particular, Kim is said have received advice from his father in his business ventures. Kim’s father, Kim Kyo-chang, is a corporation lawyer at the law firm Jeongyul.

After graduating from Seoul National University as an undergraduate of Computer Science and Engineering major, Kim Jung-ju finished his masters and doctorate degrees at KAIST school of Computing. In 1994, he founded the online game company Nexon, which was an unfamiliar industry back then.

His father was a strong supporter of his son who was walking such an unaccustomed path of establishing a game enterprise. He reportedly loaned his son 60 million won as business funds which Kim spent to find a studio in Yeoksam-dong that was used as an office.

Nexon first came up with the world’s first graphic Massively Multiplayer Online Role-Playing Games “The Kingdom of the Winds” in 1996 and “Crazyracing Kartrider” in 2004 which were huge successes, and allowed the company to become the largest game company in Korea. At the end of last March, Nexon Group owned 55 corporate bodies, 17 domestic ones and 38 overseas.

During the first five years of its establishment, his father played the role of a consultant dealing with diverse contracts as a representative of Nexon.

Senior Kim was born in Seoul, and graduated from Seoul High School and Seoul National University majoring in law. In 1962, he became a judge at Seoul District Court and in 1966, he opened a private practice as a lawyer while serving as the president of the Korea Parliamentary Law Institute and Korea Notaries Association.