The world’s first national trial of the idea, which began in Finland on Jan. 1, has boosted the discussion, which is expected to heat up in the lead-up to the presidential election this year to choose a successor to impeached President Park Geun-hye. 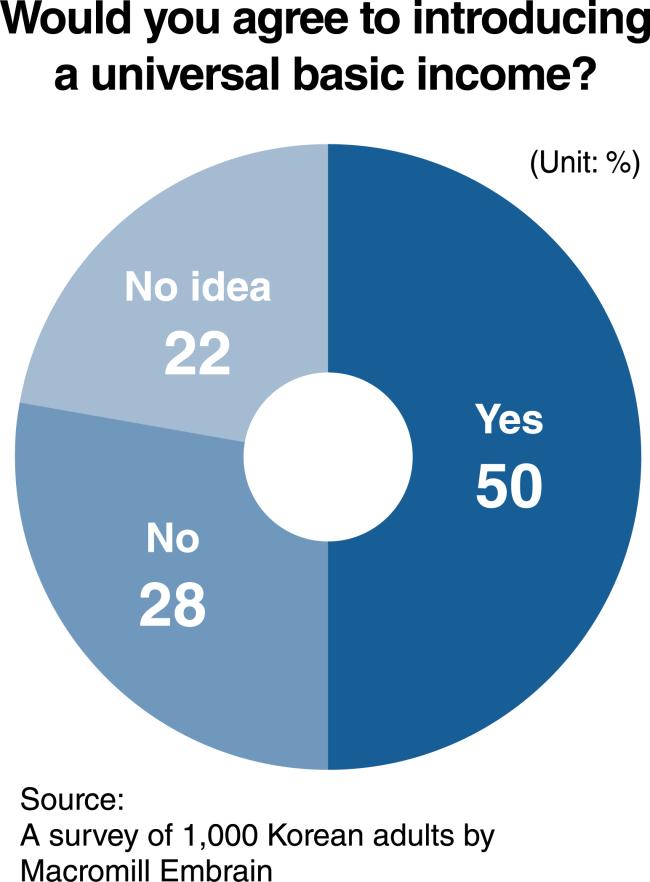 Some liberal-minded potential presidential candidates have shown support for the basic income scheme.

Seongnam Mayor Lee Jae-myung, whose approval rating has risen sharply over the past months on the back of popularity with young voters, has called for an increase in taxes on large corporations and rich people to help finance the system.

Former Prime Minister Chung Un-chan, who last month expressed his intention to run for president, argued the introduction of the basic income scheme could lead to reinvigorating the country’s sluggish economy, which is reeling from weak domestic demand coupled with a slump in exports.

Seoul Mayor Park Won-soon recently proposed what he called a “Korean version of the basic income system,” under which various cash benefits are provided to meet the needs of different stages of life cycles.

Some conservative politicians have also said they are ready to discuss introducing a universal basic income over the long term.

Critics caution against the possibility that presidential candidates will be reckless in promoting the idea as part of efforts to win voters’ hearts with populist pledges.

They also said proposals by politicians lack concrete funding plans and seem to misunderstand or deliberately distort the idea, which is gaining traction in some parts of the world as a way to guarantee living standards for ordinary people and keep the economy afloat amid the new industrial revolution.

In a paper last year, Robert Skidelsky, a professor of political economy at the University of Warwick in the UK, said “credible estimates suggest it will be technically possible to automate between a quarter and a third of all current jobs in the western world within 20 years.”

He said a universal basic income that grows in line with productivity “would ensure the benefits of automation were shared by the many, not just the few.”

Proponents of the idea argue that it will not only better protect people from the effect of automation but also could be more efficient and equitable than traditional welfare systems.

It is attractive to the left-wing as a means to reduce poverty and to the right-wing as a way to cut the massive costs involved in administering increasingly complex welfare systems.

In a referendum last year, over 75 percent of Swiss voters rejected a basic income scheme. Supporters said at the time, however, winning the backing of nearly 1 in 4 voters exceeded their expectation, saying the vote “is a beginning.”

A survey conducted last year by Dalia Research, a Berlin-based company, found that 68 percent of people across all 28 EU member states would definitely or probably vote in favor of some form of universal basic income, also known as citizens’ wage.

Under its two-year pilot scheme, Finland pays a basic income of 560 euros (700,000 won) a month to 2,000 randomly selected unemployed people, which replaces the existing social benefits and will be paid even if they find work.

Finland’s social security body said the scheme, which it hopes to expand in 2018, is aimed at cutting red tape, poverty and unemployment.

Finland is set to be followed this year by France, the Netherlands and India in trialing the idea that has been circulating among economists and politicians since Thomas Paine proposed a basic capital grant for individuals in 1797.

The South Korean public seems to remain divided over introducing a basic income granted to everyone regardless of recipients’ wealth or whether they worked.

In a survey of 1,000 adults in the country, conducted by Macromill Embrain, a local online research agency, half of the respondents supported the idea and 28 percent rejected it, with the rest reserving their judgment.

Experts here share the view Korea needs to carry out serious debate on whether to adopt a basic income scheme in a gradual manner, as the country will be no exception to the economic and social changes caused by the new industrial revolution.

They also highlighted that it would only hamper constructive discussion if politicians compete to churn out populist pledges to give free money to all citizens, without suggesting concrete funding plans and mentioning the possible forfeiting of existing welfare benefits.

According to estimates by Kang Nam-hun, a professor at Hanshin University, it would take 184 trillion won ($152.7 billion) to give each South Korean citizen a monthly basic income of 300,000 won.

The country simply cannot afford to raise the additional funds, as it currently collects about 150 trillion won in corporate, income and value added taxes combined.

This makes it inevitable for the introduction of a universal basic income to be accompanied by the abolishment or reduction of existing social benefits in the country, which fall far short of those in other advanced countries.

Some experts say it may be wiser for the country to focus on strengthening its social safety net for the time being.