The Korea Customs Service said 13,921 tons of US beef were imported here in November, compared to 10,310 tons from Australia. They include frozen and refrigerated beef that have passed customs. 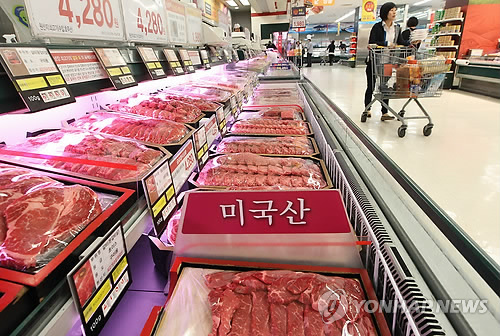 While the amount of beef imported from the US had surpassed those from Australia prior to clearing the customs process, it is the first time in 13 years that US beef has regained the No. 1 spot post-customs.

The total amount of imported beef also marked the largest since 2000 at 346,893 tons between January and November last year.

Korea had halted imports of US beef in 2003 in the wake of a mad cow disease outbreak. It lifted the ban in 2008 but the decision had led to nationwide demonstrations among people, citing concerns over their safety against the then conservative administration.

The imports of US beef had remained moderate after the ban was lifted for beef aged younger than 30 months, but the amount has been gradually increasing with rising demand.

Australian beef, on the other hand, has been suffering from falling supplies due to a severe drought. Other countries such as China, Indonesia and those in the Middle East are also increasing their imports of Australian beef, which makes it harder for Korea to secure enough supplies, according to the industry.

Distributors, such as Lotte Mart, here said they are preparing to reinforce their supply chains and stabilize prices of imported beef, such as by raising the quantity set aside in preliminary contracts with farms in Australia and the US. (khnews@heraldcorp.com)