The government is now tasked with steering the economy through worsening conditions at home and abroad, amid prolonged domestic political turmoil following last week’s impeachment of President Park Geun-hye over a massive corruption scandal.

In carrying out this thorny task, there is a risk that the weakest part of the economy could take the hardest hit from the deepening downturn. 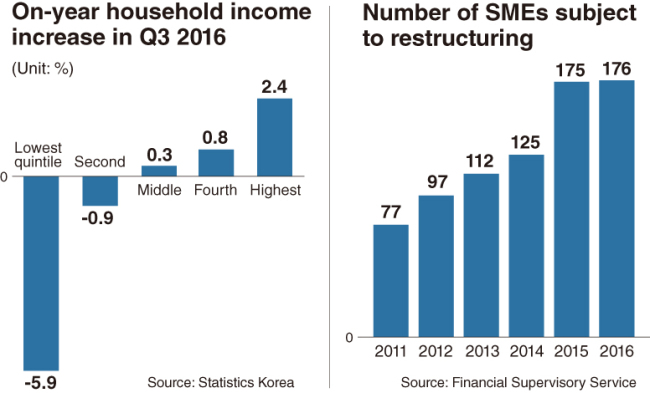 Popular anger over the scandal that has ensnared Park seems to have been exacerbated by public discontent with widening income inequality and soaring living costs.

According to recent data from Statistics Korea, the average monthly disposable income of the poorest 10 percent of households fell by 16 percent from a year earlier to 717,000 won ($610) in the third quarter of this year. This marked the steepest decrease since 2003 when the statistics office began compiling relevant data.

By contrast, the richest 10 percent saw their monthly disposable income increase by 3.2 percent over the cited period, to 8.11 million won on average.

Officials at the Ministry of Strategy and Finance say the country’s poverty rate has fallen gradually since the Park administration took over in 2013. But the reduction in the disposable income of low-income households makes their boasting sound hollow.

The statistics office attributes the decline in poor households’ disposable income mainly to a reduction in day labor jobs.

People in lower income brackets often fall victim to unregistered loan sharks who charge exorbitant interest rates as they are usually denied access to lending by banks and other commercial lenders.

There were 2,138 complaints about excessive rates imposed by unregistered private lenders in the first 11 months of this year, up 90 percent from a year earlier, according to the Financial Supervisory Service.

In another significant reflection of the economic slump, the average monthly income of householders in their 40s slid 0.03 percent from a year earlier in the July-September period, recording the first decrease since 2003. Forty-something workers account for the largest portion of the country’s labor force.

“The reduction in earnings of those in their 40s means the country’s economy is being drawn deeper into a downturn,” said Cho Dong-geun, a professor of economics at Myongji University in Seoul.

The livelihood of low-income households is getting tougher as the decrease in income has been coupled with a continuous rise in consumer prices.

According to the latest data from the statistics office, the consumer price index climbed for a third consecutive month, recording an on-year increase of 1.3 percent, in November, following 1.2 percent and 1.3 percent rises in September and October, respectively.

The fall in income also deepens concerns about the impact of a possible interest rate hike on indebted households.

Kim Ji-seop, a researcher at the Korea Development Institute, a state-run think tank, forecast that the burden of debt servicing by households would increase by 14 percent on average if interest rates were cut by 1 percentage point and household income fell 5 percent.

The protracted economic slump has also driven many small and medium-sized enterprises into marginalized conditions. As of end-2015, there were 2,754 SMEs whose operating profits were insufficient to cover interest payments.

The Financial Supervisory Service and creditor banks last week unveiled a list of 176 SMEs subjected to compulsory restructuring, the highest number since 2009, in the aftermath of the global financial crisis.

While restructuring work should be carried out in an efficient and prompt manner, support for other small businesses should be strengthened to enable them to sustain temporary hardships and enhance long-term competitiveness, economists say.

In this context, it is an encouraging trend that large companies have recently expanded cash payments to their subcontractors, shortening the settlement period.

Specific measures need to be worked out to help SMEs that have increasing difficulties exporting their goods to China, which is heightening nontariff barriers in a veiled retaliation against South Korea’s move to deploy an advanced US missile defense battery on its territory.

With the youth unemployment rate standing at a record high of 9.4 percent, it is important to get more young job seekers to work at small and midsized firms by improving wages and working conditions. Currently, SMEs employ nearly 70 percent of waged workers across the country.