On one of his regular visits to the neighborhood in the early 1970s, he discovered and purchased a Buddhist painting with notable wear and tear for a mere $10.


Unknowingly, Mattielli -- director of the arts and crafts program for the US military in Korea at the time -- had become the owner of “Obuldo,” an 18th century Buddhist painting depicting five Buddhas that had been stolen from Songgwangsa, a major Buddhist temple in Suncheon, South Jeolla Province, in the 1970s.

After making its journey to the US with Mattielli and his wife Sandra in 1985, the piece returned home to Korea on Thursday afternoon, according to the Jogye Order of Korean Buddhism.

“(The painting was) crumpled up like a bedsheet, partially folded and flaking,” Robert Mattielli, 91, recalled in a recent interview with Artsy, a US based online art resource. “I thought we’d at least be able to save certain portions of it -- the faces or bodies of the Buddhas.”

In their desire to share the piece with the greater public, the Mattielli couple decided to donate “Obuldo,” which was created in 1725 as a part of the painting of 53 Buddhas, to the Portland Art Museum in Oregon in 2014, when the National Research Institute of Cultural Heritage officials, who were in the midst of conducting research on Korean collections in the US, heard of the news.


After being notified about the institute’s research, the couple decided to repatriate the painting to its home country following a three-month exhibition at the Portland Art Museum from September to December, according to the Cultural Heritage Administration.

“‘Obuldo’ might have disappeared forever if (Robert Mattielli) had not bought and framed the severely damaged work,” said the government agency.

This is not the first time a Korean Buddhist painting has been repatriated this year. 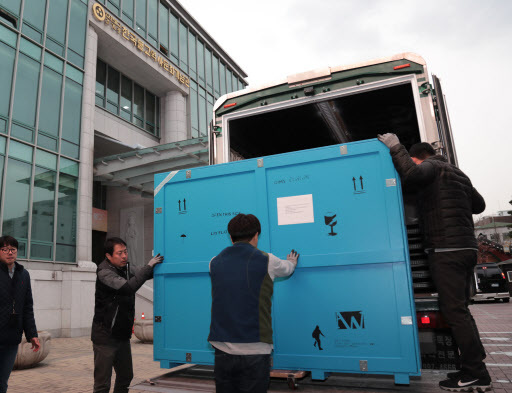 "Obuldo” arrives in a blue crate at the Central Buddhist Museum in Seoul from Portland, Oregon, Thursday. (Courtesy of the Jogye Order of Korean Buddhism)
Yoon Dong-han, the chairman and CEO of cosmetics and pharmaceutical manufacturing company Kolmar Korea, purchased the rare 14th century Goryeo Buddhist painting “Water-Moon Avalokitesvara” from a Japanese art dealer in spring for 2.5 billion won ($2.1 million). He donated the piece to the state-run National Museum Korea in October.

Currently being examined for further restoration at the Central Buddhist Museum in Seoul, “Obuldo” is scheduled to be housed and exhibited at the Seongbo Museum at Songgwangsa temple starting early next year.