Samsung Heavy Industries Co., a major shipyard here, is in final talks to secure an offshore facility deal from a Norwegian firm, industry sources said Thursday, with the final contract to be sealed next month. 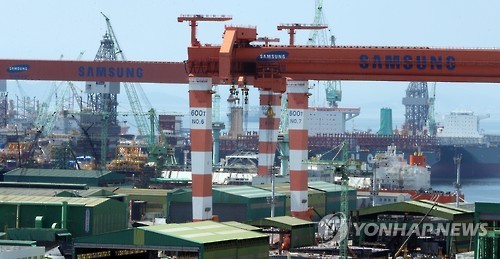 If the deal is officially signed, the ordered vessels are scheduled for delivery in 2019 and 2020, they said.

The value of the deal was not disclosed, but the sources estimated it at $800 million in total.

Samsung Heavy and local shipyards have been suffering from a fall in new orders. This year the company has set a target of $5.3 billion in orders, with $1 billion being secured so far.

The nation's big three shipyards, including Hyundai Heavy Industries Co. and Daewoo Shipbuilding & Marine Engineering Co., racked up a combined loss of over 8 trillion won last year. It was the first time that all three of the nation's largest industry players registered losses due to a delay in the construction of offshore facilities and a sharp drop in new orders. (Yonhap)