Lee Jae-yong put at center in largest hearing on chaebol

The nation was glued to television broadcasts Tuesday as the country’s top chaebol owners sat in front of lawmakers at the National Assembly to face questions over allegations they made secret deals with President Park Geun-hye and her longtime friend Choi Soon-sil in exchange for favors.

During the hearing that went on for hours throughout the day, more than 80 percent of the questions were poured on Lee.  Lawmakers bombarded him with questions on his weakest points, ranging from his alleged link to Choi to alleged irregularities over his accumulation of wealth through converted bonds, and a merger between two of Samsung’s affiliates last year.

Expressing his bewilderment, Lee often stumbled over his words when responding to lawmakers’ scathing comments that even questioned whether he is a qualified heir to the Samsung empire. Heaving a sigh, Lee said he would “hand over the management rights at any time” if there were a person who is better suited than him.

But lawmakers lashed out at Lee for evading answers by repeatedly apologizing for causing public concern when asked ceaselessly of his relations to Choi and her daughter Chung Yoo-ra, a dressage rider who the group supported. On several occasions, he said he feels grave responsibility in the wake of the scandal.

In the face of lawmakers driving him into a corner, Lee made several surprising remarks, including that he would disengage in activities with the Federation of Korean Industries, a group of businesses involved in the fundraising for the operations of the two organizations set up by Choi and her associates. He also said he would disband the group’s future strategy office. The office faced public criticism over its role in allegedly manipulating the controversial merger between Samsung C&T and Cheil Industries.

Lawmakers also brought up the controversial issue of Samsung’s former employees at its semiconductor plants who died of leukemia, urging Lee to take full responsibility. Lee said he would take all due responsibility, but it was not enough to convince legislators who appeared disgruntled at his answer, accusing him of not speaking the truth before them.

The other eight conglomerate heads were barraged with questions over their alleged cozy ties with politics and power, a topic that has mostly been considered taboo in a country where family-owned enterprises thrived under the support of militant governments in the 1970s and ‘80s. 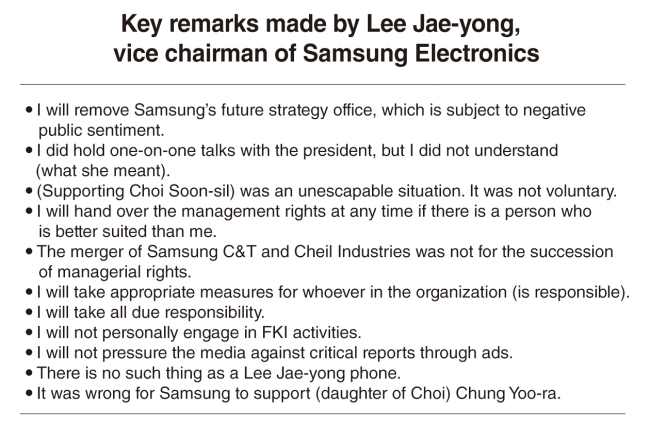 In the emotionally charged hearing, Rep. Ha Tae-keung of the ruling Saenuri Party lashed out that the hearing itself is a reflection of the businesses maintaining their cozy ties with the state, pointing out that six of the nine chaebol owners there were the children of former business leaders who testified at a parliamentary hearing 28 years ago.

In 1988, the National Assembly summoned chaebol leaders, including then-Hyundai Group Chairman Chung Ju-young, over their roles in raising funds for the Ilhae Foundation launched by former President Chun Doo-hwan.

In the largest parliamentary probe on South Korea‘s industrial titans ever, the National Assembly was packed with reporters and company officials in charge of government relations watching closely. Some had their own medical team and ambulance outside as an emergency measure for their aging tycoons.

Most were questioned on the motives behind their donations, or whether there was any coercion directly from the president.

The responses were mostly kept short as they were seen trying to avoid any incrimination. Some went through prepared answer sheets while lawmakers focused on grilling Lee.

Some questions by the lawmakers were seen veering off-topic.

Lotte’s Shin, for instance, was questioned as to whether his group should be considered Japanese or Korean.

Meanwhile, the hearing was held with dozens of protestors outside the Assembly building. The protestors held signs calling to imprison Lee Jae-yong for inflicting losses on the National Pension Service, a state fund operator, and accusing conglomerates of being “accomplices” to the nation’s biggest influence-peddling scandal.

“The key point of the hearings should be to break out of the politics and corporate nexus. Conglomerates are accomplices as they gave bribes to President Park,” Ahn Jin-geol, a member of a civil group dubbed a special commission for arresting conglomerates, told The Korea Herald.