Half of elders in poverty live alone: report

According to a report issued by the Korea Institute for Health and Social Affairs recently, about 45.9 percent of elderly in the poverty group were living alone in 2015, up from 27.1 percent in 2006.

The poverty rate refers to the ratio of households that make below 50 percent of the median household disposable income, according to the Organization for Economic Cooperation and Development.

“Despite the government’s efforts to lower the elderly poverty rate by introducing a basic pension system, such a program seems to show effect among two-member households and elders who live with their family members, rather than senior citizens who live alone,” said Lim Wan-seob, who participated in the research. 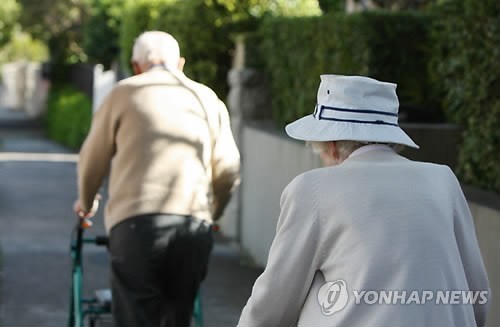 The report team said the overall poverty rate among single-member households in Korea consistently went up from 2006 to 2014, while the absolute and relative poverty rate both took a downward turn in 2015.

“The trend (of the continuously increasing elderly poverty rate) shows more elders are depending on government policies and welfare programs, while such programs should be redesigned to embrace elderly who live alone in poverty,” the research team said.

OECD data in 2015 showed that South Korea’s elderly poverty rate was the highest among 34 OECD member countries, as the poverty rate among senior citizens aged 65 or older was 48.6 percent in 2011.

Beyond that, South Korea had one of the lowest net pension replacement rates. Only five other countries -- Mexico, Japan, Britain, New Zealand and Ireland -- were ranked lower than South Korea, but those countries did not have an elderly poverty rate as high as Korea’s.