The news reports said the Korean tech giant hired Lee & Ko in response to the class-action lawsuit filed by 2,400 local consumers and to lawsuits filed by five individuals. The five claimed they suffered physical damages including burns and respiratory diseases due to the explosions of Note 7.

“We gave enough compensations and benefits to Note 7 consumers. The damages consumers are claiming are within the range that is endurable,” local news reports quoted the written opinion by Samsung Electronics submitted to the court last week.

The compensation refers to a mobile coupon amounting to up to 100,000 won ($86) and the chance to upgrade the Note 7 to the upcoming Galaxy S8 for half the price.

“We recalled all the products resulting in a loss of nearly 10 trillion won in order to minimize risk that consumers may face,” Samsung reportedly said in the opinion.

A Samsung Electronics official declined to make any official comment on the lawsuits. 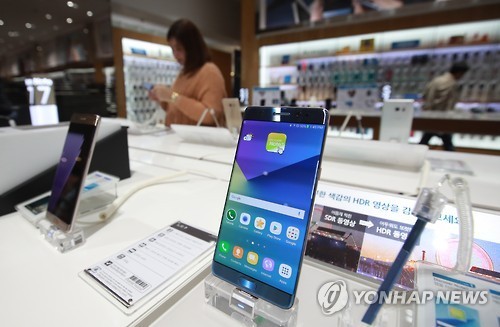 So far, 2,400 local consumers have filed class-action lawsuits against Samsung Electronics demanding 500,000 won per plaintiff to compensate for the money and time spent for replacing the phones and for psychological distress while using the devices.

“My replacement Note 7 had caught fire while it was placed on my bed. Fortunately I did not suffer any physical damage as it was covered in a phone case with a credit card inserted, both of which melted,” one plaintiff in the class-action suit said on the online community created by law firm Harvest Law Office, which represents Korean customers. The plaintiff claimed compensation of 100,000 won was insufficient for the “mental damage.”

Alongside the class-action lawsuit, five individuals recently also filed suits, claiming they had physical and mental shock from the explosion. In total, they demand 42 million won in compensation.

The five individuals includes Lee, who was the first consumer here that reported an explosion of his phone after Samsung offered replacements.

Lee said, “When I reported the explosion to Samsung, the company labeled it as outside shock and blamed me as a (problematic) consumer.”