Opposition parties seek to put impeachment to vote in

Floor leader Rep. Woo Sang-ho also said it will put the issue of forming a national unity government led by an opposition-picked prime minister on the back-burner for the time being.

"We are planning to hold a vote on the impeachment as early as Dec. 2, or no later than Dec. 9," he said. 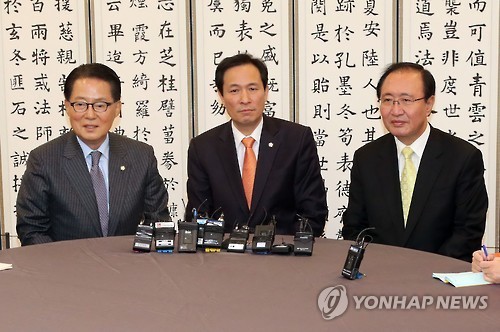 Three opposition parties and some members of the ruling Saenuri Party are pushing to impeach Park amid an influence-peddling scandal involving her and confidante Choi Soon-sil.

Woo said the party will focus on the impeachment campaign, putting aside the issues of the new prime minister and a unity government, which were proposed to fill the current power vacuum sparked by the scandal but bogged down amid differences between ruling and opposition forces.

It will mark the first time in 12 years that South Korea's parliament will attempt to forcefully oust a president. In 2004, the National Assembly voted to impeach late former President Roh Moon-hyun, which was later turned down by the Constitutional Court.

Currently 172 opposition and independent lawmakers are expected to support the proposal. The number could increase if some Saenuri members join.

Later in the day, the three opposition parties, along with the smaller People's Party and the Justice Party, agreed to cooperate in drawing up a motion to impeach the president and put it to a vote with the parliamentary session that ends on Dec. 9, according to a spokesperson of the Democratic Party.

For the impeachment motion to pass the Assembly, it needs support from at least 28 Saenuri lawmakers. Thirty-two lawmakers from Saenuri have already expressed their support. But pundits do not rule out the possibility some opposition lawmakers may vote against it.

Once the motion is passed, it will be adjudicated by the Constitutional Court, which experts estimate may take some three to four months.

The factional feud in Saenuri has been escalating over whether ruling party lawmakers should join the impeachment bid.

Saenuri head Lee Jung-hyun warned Thursday that the party cannot become a "betrayer" of Park. He added that the impeachment will further increase uncertainty and risks for the country.

Observers said Saenuri may be on the path to breakup, especially as its former head Kim Moo-sung declared his support for the impeachment on Wednesday.

Later on Thursday, a group of 158 lawmakers, including 32 from Saenuri, announced a draft resolution calling for the National Assembly to come up with measures to have the president step down in an "orderly" manner and fill the government vacuum, which exposes the country to increasing risks.

They also called on the speaker to convene a special session involving all legislators to discuss the solution to the current crisis, before the impeachment motion is put to a vote. Pundits said such a plenary session can also help draw 200 lawmakers, which is needed to pass the motion, to the floor. (Yonhap)