[John H. Cha] For the love of Dosan Ahn Chang-Ho 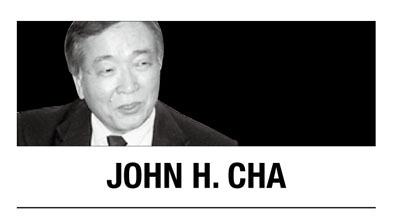 I had the honor of writing about Susan Ahn Cuddy, who was the first woman gunnery officer in the history of the US Navy during WWII. She wanted to help the US win the Pacific War against imperial Japan.

When she was serving in the Navy, the thought of being “the first” of anything had never entered her mind. That wasn’t what drove her. She did it because of her father’s legacy as an independence fighter for Korea. Restoring the independence of Korea from imperial Japan was a life mission for her father and, therefore, for her.

Her father, Dosan Ahn Chang-Ho, and mother, Lee Hye-Ryon, had come to San Francisco in 1902 with the intention of studying in the American educational system and returning to their native Korea. However, historical developments prompted them to change their plans, mainly imperial Japan’s annexation of Korea.

A genius organizer, orator, and visionary, Dosan formed a number of organizations to lead Koreans’ struggle against Japanese rule in Korea, while his wife remained in America with their children, hoping to one day return to an independent Korea. Under Japanese rule, Korea was not a safe place for her and her children because of Dosan’s work. His work made him a regular guest in Japanese prisons.

Seodaemun prison in Seoul was the last prison he was held at. There he was known as “prisoner number 1724.” He died in 1938, having suffered from torture and deprivation. His unwavering patriotism and teachings have been a source of inspiration for many even today, 78 years after his death.

In fact, there are a couple of young people in Los Angeles who are working to bring more light to Dosan’s life. They are Joseph Lee, an artist and painter, and Matt Kim, owner of KORE Limited and an aficionado of Korean culture. These two men put together a mural project in the middle of Koreatown that has become the talk of the town. The mural, about 4 meters by 3 meters in size, is Dosan’s portrait from his last photograph taken at Seodaemun prison.


Painted on a wall near Olympic Boulevard and Vermont Street, Dosan dressed in his prison garb speaks to the community with his steady gaze, depicting the demise of the Korean nation during the early 20th century, and yet radiating hope over despair. His legacy of pursuing truth and justice comes through live and well.

How did this come about? Matt Kim knew about the empty wall on the side of an auto parts store for years. He noticed that there were many murals in the LA area, but none about Korean heritage, and so he convinced the store owner that there should be one on his wall. Kim pored over many ideas for months in search of the one that would sing to the youth of Koreatown.

Finally, an idea came to him while he was watching a popular Korean television show called “Infinite Challenge” featuring Yoo Jae-Seok and a team of comedians. The show was about Dosan Ahn Chang-Ho’s legacy in America, and Kim found his answer -- Dosan’s portrait. He searched the internet for an artist who specialized in portraits and found Joseph Lee.

Kim and Lee went to see Philip Ahn Cuddy, Dosan’s grandson, who had appeared on the show, and learned about Dosan. A specialist in portraits, Lee was moved by Dosan’s last picture in a very profound way. “I saw his picture for the first time. It was a powerful picture. Right away, I wanted to go inside his brain and channel his views and outlook on life, translate it and bring him into the contemporary world.”

Just like that, he began preparing the wall and in three days, he finished the portrait. The entire process quietly took place without the usual fanfare that accompany Korean events. Kim and Lee did not do the portrait project to become “the first” of anything, or for recognition. They did it out of genuine inspiration, for love and respect of Dosan the man and what he stands for. A lifelong independence fighter, Dosan is often referred to as the Abraham Lincoln of Korea on account of his honesty and integrity, the foundation of his work and life.

The artwork reflects their effort, a living memorial, and it is sure to be noticed by the audience they had intended to reach -- the youth of the Korean-American community and beyond. Looking at the portrait, I am reminded of his quote, “What seems to be a dried up spring often produces water when you dig beneath it. Keep digging until the water flows. Love works the same way. We should take this lesson about love and make it our chosen path.”

John H. Cha lives and writes in Oakland, California. He has written several biographies about Korean and American leaders, including “Willow Tree Shade: The Susan Ahn Cuddy Story,” “The Do Or Die Entrepreneur,” and “Exit Emperor Kim Jong-il.” Cha is an award-winning translator of Korean literature into English. His latest translated work is “Olympic Boulevard.” ― Ed.