"The prosecution's announcement of its investigation result is very regrettable," a presidential official told Yonhap News Agency over the phone, saying Cheong Wa Dae will issue an official statement on the issue later in the day.

On Sunday, prosecutors first mentioned Park's alleged "complicity" in the scandal involving her friend Choi Soon-sil and her former key secretaries -- Ahn Chong-bum and Jeong Ho-seong -- among others.

The prosecution said Park colluded with Choi, Ahn and Jeong in "considerable parts" of the alleged criminal acts, effectively turning the president's status to a suspect from a witness in the high-profile case that has rocked the country over the past several weeks. 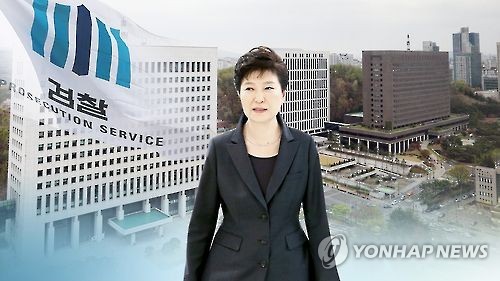 The prosecution vowed to continue its probe into the president, though it said it cannot indict Park due to a constitutional clause that stipulates a president is immune from prosecution except in cases of insurrection or treason.

The interim investigation result is expected to further infuriate citizens, who have been calling for Park's immediate resignation through massive street rallies across the nation, and spur political discussions for her impeachment.

Park now faces allegations that through her aide, she allowed Choi to gain access to some 180 presidential speeches and government documents, some of which included classified information. The allegations raise the possibility of Park violating the law governing the handling of official secrets.

The president is also alleged to have directly or indirectly pressured major conglomerates into donating large sums of money to two nonprofit foundations, which legal experts say could constitute an abuse of authority.

Through her addresses to the nation on Oct. 25 and Nov. 4, the president admitted to handing over some of her speech drafts to Choi to get her advice, and claimed that her role in raising funds for the two foundations was based on "pure motives" to benefit the country. (Yonhap)