Charming stories of English village life in 'Notwithstanding' 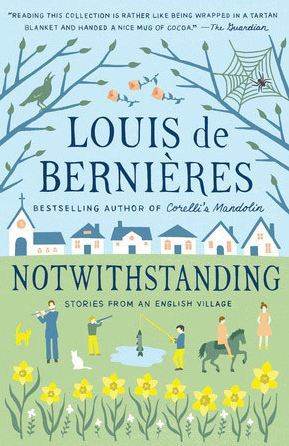 “Notwithstanding,” the new collection of 22 short stories from Louis de Bernieres, is utterly charming. And, no, that’s not damning with faint praise.

Charming is a quaint, old-fashioned word, and this is a quaint book, originally released in England in 2009, that captures the quirky characters in an old-fashioned English village, called, of course, “Notwithstanding.”

But while the stories in this collection are sweet, there’s no treacle here. And the characters, while initially seeming like caricatures, come to life -- warts and all. Jack, the last peasant in the village “reeks of six decades of neglected hygiene.” Lonely, priggish Mrs. Griffiths gets roaring drunk after a keen disappointment.

With its simplicity, its laugh-out-loud humor and quotable bits of wisdom, this very English book goes deeper than it first seems.

At the end of a story about a young boy catching a local legend of a fish, we find him feeling torn about the triumph that will come to define his life: “He was haunted by how beautiful the pike had been when it was first out of the water, and how its beauty had already diminished when it had been out for only an hour. He knew instinctively that beauty should last forever, and that this world would never be perfected until beauty was perpetual.” (TNS)