HHI to be separated into six businesses 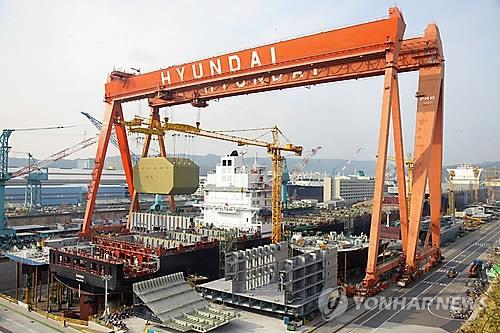 The shipbuilder said it received approval from the executive board to separate the company into six businesses: shipbuilding, marine business and engine; oil and green energy; electronics; construction equipment; robot; and commercial services.

“While (the company) previously focused on consolidating noncore businesses, from now on, we will put the utmost efforts into actively raising the key businesses of each sector. Separating into six will be the starting point,” said company officials.

The shipbuilder has so far concentrated on selling noncore businesses or separating the hotel business from the company as part of the restructuring move.

HHI’s noncore businesses had difficulties in securing their own independent competitiveness as the company tended to focus only on the shipbuilding sector, the company said.

“The separation of the company is one of the last steps of the self-rescue plan that it submitted to the creditors earlier this year. Carrying it out in advance, (the company) attempted to raise its credibility and prepare a foothold for a new start,” they added.

With the new measure, the shipbuilder is seeking to improve the financial health and cut the debt rate to under 100 percent by sharing the debt among the six businesses.

After the company recorded a massive operating loss in late 2014, it has carried out large-scale restructuring.

It submitted the self-rescue plan in May to its creditor with an aim to cut the total debt from 8.5 trillion won ($7.3 billion) to 6 trillion won by 2018 and to reduce the debt rate to 134 percent.

The latest move is projected to cut the number of jobs from some 24,000 to around 17,000, industry insiders said.