The ruling Saenuri Party and opposition parties agreed to pass a bill aimed at naming an independent counsel and launching a parliamentary inquiry into the Choi Soon-sil scandal. The legislation will be submitted to the plenary session Thursday.

The draft bill intends to grant the right to recommend two candidates for the counsel to the main opposition Democratic Party of Korea and runner-up People’s Party. The president is to choose among the two.

If the bill clears the opposition-controlled parliament as scheduled, an independent counsel will replace the prosecutors’ current investigation team and will launch early next month a probe of scope and size not seen in decades. They will work for up to 120 days. A parliamentary inquiry, meanwhile, will last for up to 90 days.

“The investigation is entirely up to the independent counsel. It can decide what and how to investigate the case,” Saenuri Party’s vice floor leader Rep Kim Do-eup told reporters Monday after finishing the negotiation with the opposition parties. 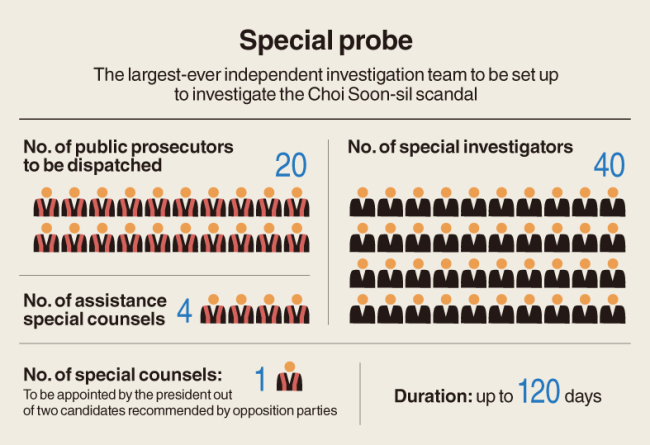 According to the bill, a total of 20 prosecutors will be dispatched to the investigation team, and it will conduct a probe into 15 major allegations surrounding Park, including her whereabouts during the Sewol ferry sinking in 2014, which left 295 people dead and nine missing.

Rumors about the president’s “missing seven hours” on the day when the ferry sank have been a recurring theme here. Some local media have reported that she underwent plastic surgery during that time. Cheong Wa Dae had dismissed the allegation as “groundless rumors.”

The special investigation team is expected to be the biggest organization run by an independent counsel since the system was adopted. In 2008, ten prosecutors were sent to the investigation team targeting then President-elect Lee Myung-bak over the allegation that he engaged in an illegal land purchase deal.

The move is a reflection of the political landscape tilting toward opposition parties amid mounting public outrage against the president over the scandal. Her approval rating has dropped to a record low and hundreds of thousands of people have staged rallies to demand her resignation.

“There was no wiggle room in the negotiation since there are mounting calls to get to the bottom of the scandal,” Saenuri floor leader Rep. Chung Jin-suk told reporters Tuesday.

There are clauses that separate the opposition-led bill from other laws covering the scope and authority of the independent counsel. Opposition parties have asserted that a new law is needed to investigate the biggest political scandal involving an incumbent president.

Among them was a clause that allows the special counsel to hold press briefings during the investigation into the president. Rep. Park Beom-hye, who drafted the bill, said that the measure was to ensure people’s right to know by keeping them informed about the probe.

The independent counsel is expected to investigate whether the president had abused her power to extract money from conglomerates. Park is suspected of instructing her aides to raise some 77.4 billion won ($67.4 million) and offering the money to nonprofit foundations run by Choi.

The investigators will also focus its probe on whether the president demanded the conglomerates donate the money “by herself” when Park hosted a meeting with seven local conglomerates at Cheong Wa Dae in July 2015.

Another charge facing Park is whether she instructed her presidential aides to share confidential documents, such as presidential speeches, with her confidante Choi, who has never held a government position

If the documents that Choi received are found to have contained sensitive information on military and diplomatic issues -- or the prosecutors find more confidential documents shared with Choi -- she could be charged for leaking secrets about national security.