The Korea Herald is publishing a series of articles on the alarming state of the country’s economy and the challenges to be addressed. This is the fourth installment. -- Ed.

Government policymakers project the growth rate to remain at 2.8 percent this year before reaching 3 percent next year. But many private economists see this projection as too rosy, forecasting that Asia’s fourth-largest economy would expand by slightly over 2 percent in 2016 and 2017. 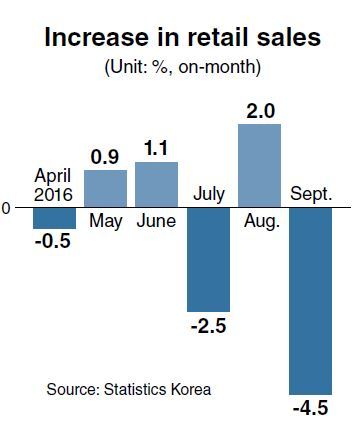 What complicates efforts to reinvigorate the sluggish economy is the slump in domestic demand and the continuous fall in exports.

According to data released by Statistics Korea last week, private consumption dropped by 4.5 percent from a month earlier in September, marking the steepest on-month decline in nearly six years. In particular, retail sales of durable goods such as cars and home appliances fell by 6.1 percent.

Stalled income and concerns over future economic prospects have led consumers to tighten their purse strings.

Average household propensity to consume, which refers to the ratio of consumption spending to disposable income, remained at a record low level of 70.9 percent in the second quarter of this year. The comparable figure for the fourth quarter of 2008 in the immediate aftermath of the global financial crisis stood at over 74 percent.

In what is viewed by experts as a telling sign of increasing financial difficulties faced by households, more people have closed their installment savings accounts before maturity this year.

The rate of early cancelation of installment savings accounts at the country’s six major commercial banks reached 45.2 percent at the end of September, up from 42.6 percent a year earlier, recent industry data showed.

Bank officials note that, in the face of worsening financial situations, households tend to terminate insurance policies and stop putting money into investment funds before canceling installment savings accounts at the last minute.

Since last year, government policymakers have tried to prop up the sluggish economy by boosting domestic demand to offset the negative impact of declining exports on growth.

South Korea has seen its exports, the country’s main growth engine since the 1960s, shrink in the past couple of years amid a slowdown in global trade.

According to government data, South Korea’s exports have posted an on-year decrease in 21 months out of the 22 months through October. Its outbound shipments fell by 3.2 percent from a year earlier to $41.9 billion last month, following a 5.9 percent decline in September.

With the almost exhausted fiscal stimulus, the government is running out of effective short-term measures to bolster domestic demand. Government policymakers want the central bank to help reinvigorate the economy by further cutting its key interest rate, which has remained at a record low level of 1.25 percent since June.

Bank of Korea officials, however, worry that an additional rate cut would exacerbate the household debt problem regarded as a time bomb hanging over the Korean economy.

According to a recent report from the Hyundai Research Institute, a private think tank, the country’s household debt, which stood at 1,257 trillion won ($1.101 trillion) as of end-June, is projected to rise to 1,360 trillion won by the end of this year and exceed 1,500 trillion won next year.

The ratio of household debt to disposable income soared from 162.9 percent in December 2014 to 173.6 percent in June.

“With ballooning household debt weighing down on consumption spending, a drop in property prices could drag the economy into a crisis,” said Son Jong-chil, an economics professor at Hankuk University of Foreign Studies in Seoul.

Domestic spending is expected to further weaken in the coming months as tens of thousands of workers are likely to lose jobs in the process of ongoing corporate restructuring. The effects of the strict anti-graft law that was implemented in September are being felt with a steep reduction in sales of retail businesses and restaurants.

Experts indicate what needs to be done immediately to shore up domestic consumption is to strengthen support for low-income households that tend to show higher propensity to consume.

According to data from Statistics Korea, consumption spending as a percentage of disposable income amounted to 107 percent for the bottom 20 percent income group in the second quarter of this year, compared to 59 percent for the top 20 percent.

But the average monthly income earned by the lowest 20 percent of households fell by 6 percent from a year earlier to 1.39 million won in the April-June period, while the comparable number for the top 20 percent climbed by 1.7 percent to 8.21 million won.

In a recent survey by a local daily of 100 experts here, most raised the need for accelerating deregulation to encourage corporate investment, particularly in service industries such as medical care and finance.

They also called for the government to expand fiscal expenditure to help spur the economy.

In a recent interview with a local newspaper, David Lipton, first deputy managing director of the International Monetary Fund, advised South Korea to become a truly advanced economy by shifting from an exports-led growth model to an economy balanced between internal and external sectors.

Although on a continuous decrease in recent years, exports still account for more than half of South Korea’s GDP, far higher than the corresponding ratios of other advanced economies. This leaves the country particularly vulnerable to worsening global economic conditions.

The rising trade protectionism across the world, which is poised to further hurt South Korean exporters, was cited by Lipton as a reason for the country to step up efforts to expand domestic markets.