By Yoon Min-sik
Published : Nov 4, 2016 - 17:50       Updated : Nov 4, 2016 - 18:20
South Korea has had 11 presidents -- six of them directly elected -- but nearly all saw a gloomy end to their terms. Three were forced to step down, one was assassinated and another jumped to his death after retirement. Most had their legacies tainted by scandals and two of them were put behind bars.

President Park Geun-hye, the only woman and unmarried leader of the 11, appears to have failed to escape the trap.

With 16 months left in her five-year term, Park is facing a humiliating crisis that also threatens her job, as her civilian friend Choi Soon-sil is accused of a wide range of wrongdoings committed by using their 40-year ties.

Park’s approval ratings have plunged to a level that none of her predecessors ever saw -- 5 percent according to a Gallup Korea poll released Friday. In another survey, 65 percent said they want her removal from office. 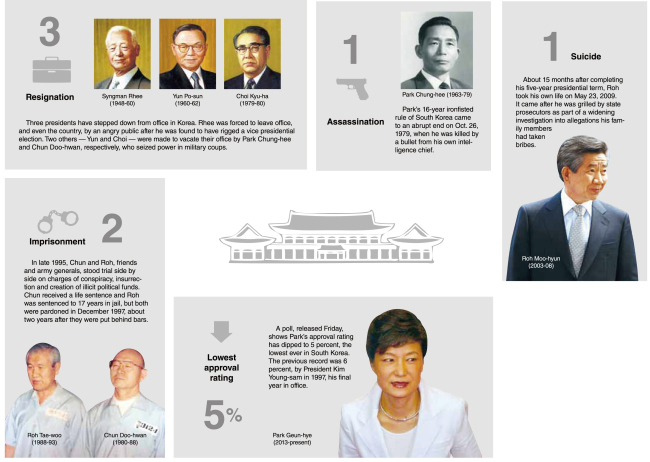 The predicaments of Korean presidents trace back to the era of Rhee Syng-man, the country’s very first head of state.

Idolized by conservatives for his contribution to the nation’s foundation and hated by liberals for his dictatorship, Rhee rigged the presidential election to ensure that his aide Lee Ki-poong was elected the vice president in 1960.

Faced with massive public revolt, which culminated in the April 19 Movement, Rhee stepped down on April 29, 1960, after 12 years in power. He fled to Hawaii and died in exile five year later.

One of the most dramatic endings was met by Park Chung-hee, who was fatally shot on Oct. 26, 1979, in what some say was the Korean equivalent of Brutus assassinating Caesar. He was killed by Kim Jae-gyu, then-director of the Korean Central Intelligence Agency and a close aide of Park, who claimed he was doing so for the sake of the country.

This ended the 16-year ironfisted rule of the Army Gen. Park who seized power through a military coup. It also left the young Park Geun-hye, the incumbent president, orphaned and the country in the hands of then-Prime Minister Choi Kyu-hah.

The two presidents who came to occupy Cheong Wa Dae after the interim leader Choi -- Chun Doo-hwan and Roh Tae-woo -- finished their terms, but they faced many troubles afterwards.

Both faced retribution for their suppression of democratic movements in the 1990s. In 1994, 22 former military officials filed charges against Chun, Roh and 32 officials involved in the 1980 coup through which Chun rose to power. They were also accused of collecting a massive amount of secret funds illegally.

Chun was sentenced to death for his involvement in the coup, which later was lowered to a life sentence in an appellate court, while Roh received a 17-year jail sentence.

Both were put behind bars but were pardoned in 1997.

The era of President Kim Young-sam, the first nonmilitary president to be elected -- began in 1993 with much hope.

His approval ratings peaked at 83 percent in his first year in office. In the last year of his term, however, his ratings plummeted to just 6 percent, as South Korea’s economy was close to bankruptcy, as it had been hit hard by the 1997 Asian financial crisis.

It was the lowest presidential approval rating in history until President Park Geun-hye set a new record of 5 percent.

While in office, Kim also saw his son being arrested on charges of receiving bribes and abusing his position as the president’s son.

The next president -- Kim Dae-jung -- received the Nobel Peace prize in his third year in office, but also saw his two sons being arrested for bribery.

President Roh Moo-hyun’s era was full of drama, too.

Having been elected with a dramatic come-from-behind victory, the liberal politician and former human rights lawyer became the first president to face impeachment in 2004. He survived it with overwhelming public support, but saw his popularity drop sharply going into the final year of his term.

After his retirement, his family members were embroiled in a bribery scandal. The intense investigation by the prosecution -- which was suspected of being politically-motivated -- resulted in Roh committing suicide in May 23, 2009. The prosecution ceased investigation after his death.

President Lee Myung-bak faced a scandal even before taking office. Accused of having been involved in a stock price rigging scheme, Lee, then president-elect, underwent a prosecutorial probe and was cleared of wrongdoing.

Throughout his term, the former Seoul mayor grappled with many controversies and scandals, but the biggest crisis came in 2008, when South Koreans held massive candlelight vigils to protest against his handling of a trade deal to import American beef.