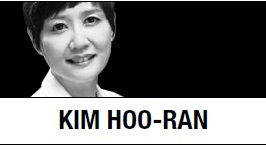 President Park Geun-hye’s brief apology Tuesday afternoon that lasted all of 1 1/2 minutes was the final blow for those who had been holding out hope that what they had seen in the news was not true.

Watching Park on television admit to seeking Choi Soon-sil’s assistance made stomachs churn. She said that she consulted with Choi, who had helped her during difficult times, so as to be “thorough” and out of “pureness of heart.”

If this is how Park truly views the situation, then she can be accused of being a simpleton, unfit for the office of president and all its complex responsibilities. Park should have known that the minute she took the oath of presidency, she was no longer an ordinary person. The minute she swore that solemn oath, her every word, every action thereafter, became the president’s words and actions.

If she had previously relied on a close confidante, now, as the occupant of the Blue House, she ought to have consulted her numerous assistants and advisers, the top brains of the country, not “some Gangnam ajumma,” as a ruling Saenuri Party member referred to Choi.

It is truly frightening that this confidante, with no official position in the government and apparently without any qualifications that could have given her the sort of power she apparently wielded, was allowed to continue uninterrupted.

Choi’s involvement in the establishment of the Mir Foundation and K-Sports Foundation -- funded by large contributions from Federation of Korean Industries members -- is now being investigated, as are her close associates, including Cha Eun-taek, a well-known music video and commercial film producer, whose phenomenal rise to power in the cultural sector has been credited to his relationship with Choi.

Park’s administration gave prominence to culture and its enrichment. The Presidential Committee for Cultural Enrichment was inaugurated and a monthly “Culture Day” was instituted, a day when admissions to cultural events and museums were offered for free or at discounts.

Culture Minister Yoo Jin-ryong was fired in July 2014 after clashing with Park. A Culture Ministry official who wrote a report that was not to Park’s liking was demoted and then finally asked to leave. The National Museum head was allegedly removed for refusing to host an exhibition that Park wanted to see.

In the latest revelation concerning shenanigans that went on at the Culture Ministry and its affiliated organizations, Yoo came forward with the allegation that the unprecedented collective resignations of six high-level officials of the Culture Ministry in October 2014 were ordered to prepare the ground for the Mir and K-Sports foundations.

The Mir Foundation was launched in October 2015 and K-Sports Foundation in January this year. Yoo pointed to then-Chief of Staff Kim Ki-choon as having ordered the resignations. Yoo further alleged the Blue House screened Culture Ministry officials’ “ideological orientations” to arrive at the list of the six officials to be sacked.

A former head of the Korea Tourism Organization recently claimed he was replaced in April 2015 because he refused to appoint Cha to head the Milano Expo organizing committee.

Cha eventually snapped up that position. Cha held numerous appointments in cultural-related government organizations, including the Presidential Committee for Cultural Enrichment and the Creative Economy Initiative. All indications are that it was Choi herself, or his ties with Choi, that landed Cha the positions.

It is thought that Cha, in turn, had a hand in appointing his acquaintances to powerful positions. Former Culture Minister Kim Jong-deok, who replaced Yoo, was Cha’s professor and at one time a business associate; Cha’s relative was appointed Blue House senior secretary for education and culture.

It is under this administration that a “blacklist” of nearly 10,000 cultural figures “classified” as being critical of the government has surfaced, despite Culture Minister Cho Yoon-sun’s disavowal of the existence of such a list.

It is also under this administration that the Busan International Film Festival, Asia’s premier film festival, has faced its greatest crisis yet. The festival went ahead with the screening of a controversial documentary on the Sewol ferry disaster in 2014, despite the Busan mayor’s very public wish to have it removed from the film roster. An audit and investigation into BIFF soon followed and prominent directors have boycotted the festival since, urging greater autonomy for the festival.

How ironic that the administration that made culture and creativity its rallying cry in fact did such disservice to those endeavors. The government stifled creativity by cutting funding to those deemed to be in opposition. Longtime government officials in charge of cultural policies were axed for no clear reason.

The president seemingly allowed her confidante to exercise power unchecked, especially in the cultural sector. It is suspected that Choi and her closest associates exploited culture-related events and organizations for personal gain. The lofty goal of cultural enrichment, it appears, was appropriated by the president’s confidante and her cronies who sucked the marrow out of culture to fatten their bellies. It will be a long path to resuscitating culture and rehabilitating it back to health.

Kim Hoo-ran is the lifestyle desk editor at The Korea Herald. She can be reached at khooran@heraldcorp.com -- Ed.