Shareholders attending the meeting scheduled to be held at 10 a.m. in Seoul will be asked to vote on appointing Lee, the only son of Samsung chairman Lee Kun-hee, by a show of hands. 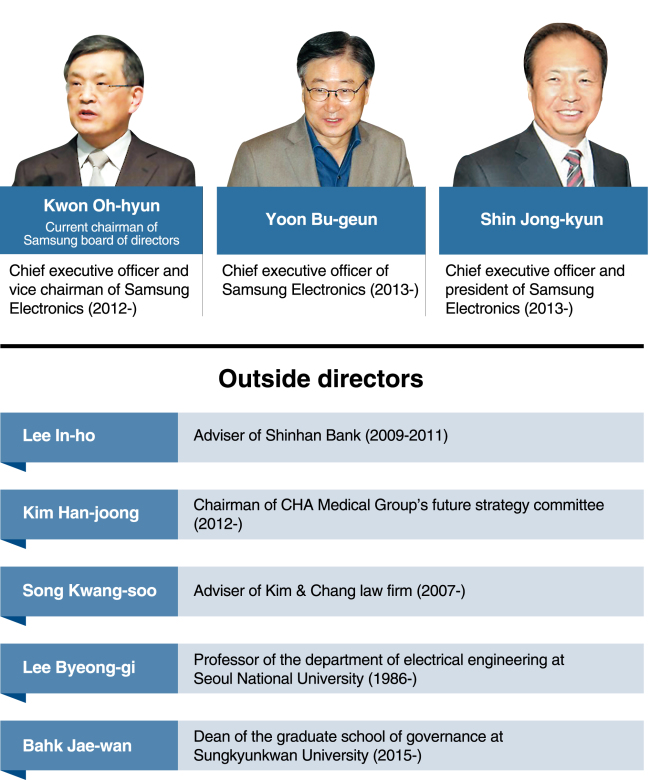 The bill is expected to be passed smoothly, as the majority of investors in and out of the country have already expressed their approval on having him as a registered board member.

If approved, Lee will be responsible for civil and criminal matters involving the world’s largest maker of smartphones and microchips. He will be the first family member to join the boardroom in eight years after his father left over the prosecution’s probe into the group’s slush funds.

What the market is expecting the most is the possible change within Samsung Electronics, the core unit of Samsung Group, the nation’s largest conglomerate, after the “crown prince” joins the boardroom.

Expectations are high on what the 48-year-old grandson of Samsung Founder Lee Byung-chull has in mind to save the tech giant, which is stuck in a quagmire over the unprecedented global recall and halt in production of Galaxy Note 7 smartphones as well as its future path afterward.

In a rare speech, Paul Singer, founder of US activist hedge fund Elliott said Tuesday that he expects positive change at Samsung.

“We are optimistic about that one -- we think it’s a tremendous platform and a tremendous value,” he said during an appearance at the Wall Street Journal’s WSJDLive 2016 global technology conference

But the title of registered board member will be a heavy responsibility because Samsung Electronics’ new board of directors will be pressured to be more competitive and transparent, experts said.

Lee will be working with three other internal directors including co-chief executive officers Kwon Oh-hyun, Yoon Boo-keun and Shin Jong-kyun. Lee will replace Chief Financial Officer Lee Sang-hoon who is stepping down from the post.

“When Lee is nominated, more eyes -- at home and abroad -- will be on the board of directors. The increased monitoring will put Samsung in a difficult position to ignore outside views and investors,” said Chung Sun-sup, the president of Chaebul.com, a website that tracks Korean conglomerates.

Early this month, ta US activist hedge fund pointed out in a letter made public that Samsung’s board of directors lacks gender diversity and professionalism compared to other global tech firms such as Apple, Qualcomm, Micron Technology and TSMC.

“Nominal roles of some directors who have no business management experiences will be pressured to change in the new board of directors,” said Lee Man-woo, a professor at Korea University’s Business School.

Currently, the five outside directors are comprised of a former public prosecutor general, a former financial holdings chief, a former college head, an engineering professor, and a former finance minister.

Their capacities, however, have not been important so far because they have not raised their voices within the body.

Samsung’s outside directors have never voted against agenda over the past 15 years, according to the Financial Supervisory Service.

Lee’s new title as a registered board member, will have him more exposed to the public, including his views, salary and possibly vision. Under the international rules on board of directors, a board of director must attend every board meeting to vote for agenda.

His salary will also be disclosed twice a year in the company’s business reports. Under the nation’s capital market law, board members who receive more than 500 million won ($441,000) in annual salary should make the amount public.

Lee has not disclosed his salary yet as he has only served as a chief operating officer of the company.

Samsung believes that it is the most opportune time to settle the fallout the company faces from the collapse of its Galaxy Note 7.

Still, some view the nomination as not enough to deal with the Galaxy crisis and say that Lee should go further.

“A board of directors is a body to monitor a company’s management. To deal with the crisis the company faces, Lee needs to take up a CEO role, not a board of director role, to show responsibility in management,” said Park Sang-in, a professor at the Graduate School of Public Administration at Seoul National University.