While environmental depletion has been a worldwide trend over the past decades, its consequences could not be more alarming than in South Korea -- a country with scarce, yet quickly depleting ecological reserves.

Nonetheless, Korea today has potential to significantly reduce its burden on nature by initiating big and small changes from both the top-down and bottom-up perspectives, said the Global Footprint Network, an international environmentalist think tank.

Throughout the course of its rapid economic development, Korea has been using up more resources than nature can provide, according to the “Korea Ecological Footprint Report 2016,” jointly published by the GFN and the World Wide Fund for Nature, Korea. 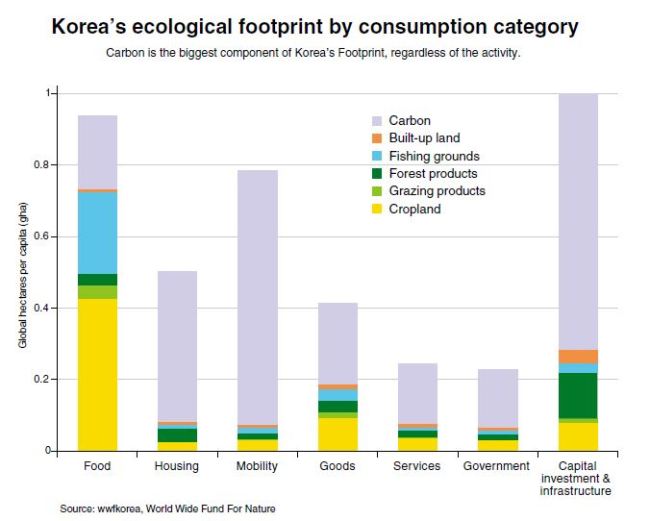 “Over the past 50 years, the rapidly widening gap between demand and what ecosystems can regenerate has created a nearly fivefold increase in Korea’s ecological deficit,” the report said.

An ecological deficit occurs when a population’s demands on nature exceeds the region’s biocapacity. This deficit is closely linked to a country’s ecological footprint — the amount of productive land and sea needed to support a population’s consumption and its spillover waste.

In the case of Korea, food, housing, mobility as well as goods and services make up around 70 percent of the country’s ecological footprint, according to the GFN and WWF-Korea’s joint report.

This indicates that Korea can vastly reduce its ecological footprint by encouraging individuals and families to change their daily consumption and lifestyle decisions in ways that support the environment, the GFN said.

The biggest contributor to Korea’s ecological footprint by category is food (23 percent), according to the GFN. This is not unique to Korea, as some 30 percent of the world’s food supply is wasted every year, according to a 2013 report by the UN-based Food and Agriculture Organization.

The easiest way for a country to reduce its food footprint is to eliminate food waste at every link of the human food chain, as emphasized by FAO Director-General Jose Graziano da Silva in 2013.

Reducing food waste by 1 kilogram is said to be equivalent to planting 322 adult pine trees or reducing some 894 kilograms of carbon dioxide in the atmosphere. If Korea’s entire population were to reduce food waste by 20 percent, it would be the same as planting some 360 million trees. 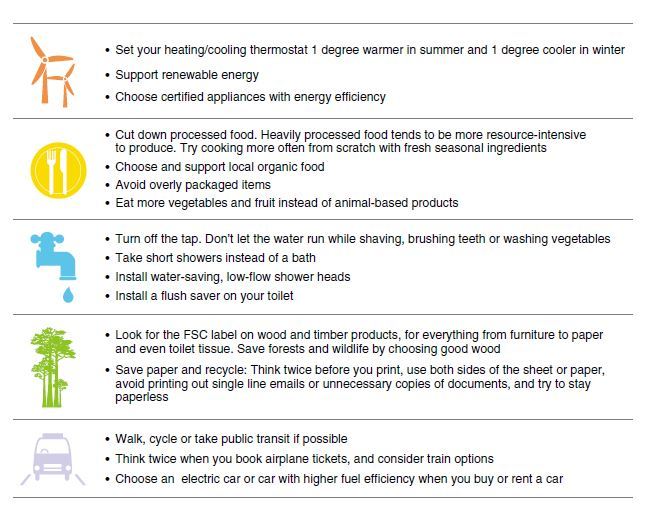 On an individual level, the GFN advised Koreans to consider cutting down on processed food, as heavily processed food tends to use up more resources in the production process. Individuals could cook more from scratch, support organic food and vegetables as well as avoid purchasing overly packaged items, it said.

Other major contributors to Korea’s ecological footprint are transportation and the high usage of fossil fuels for power, factors which also expedite global climate change, according to the GFN.

Given this, “transitioning to renewable energy is one of the most powerful ways for Korea to lower its Ecological Footprint,” the GFN suggested. And there is great room for improvement, as renewable energy takes up less than 1 percent of the Korea’s total energy usage, a situation shared by other developed countries in the world, it said.

In 2014, coal supplied 39 percent of Korea’s electricity power generation while nuclear power accounted for 30 percent and liquid gas 21 percent, according to a 2015 report by the Ministry of Trade, industry and Energy.

The government and businesses can invest in walkable cities with green infrastructure and low carbon transportation, while citizens can be encouraged to use more public transportation and purchase electric cars when possible, the GFN said.

“Given the fact that Korea imports 96 percent of its primary energy, according to the International Energy Agency (2012), investment in renewable energy will help reduce energy security risk and economic uncertainty,” the environmental body said.

For individuals, traveling by public transportation instead of car can significantly reduce carbon emissions — bus by 85 percent and train by 90 percent, according to the Environment Ministry.

Choosing certified appliances with high energy efficiency, taking a short shower instead of a bath, saving paper and recycling are daily habits that citizens could adopt to conserve energy, the GFN said.

Looking ahead, the global environmentalist think tank expressed hopes that Korea could emerge as an international leader in driving forth new developments in the renewable energy sector.

“Korean technology has had a dramatic impact on our lifestyles, which created a revolution in information and communications technology. This same innovative spirit now needs to be directed towards the huge challenge our country faces. Given the right incentives, Korea could lead the way in a sustainable energy revolution,” the GFN said.