The Ministry of the Interior said that it decided to reveal those on the list after they refused to specify their reasons for failing to pay their taxes even though they have been asked to do so for more than six months. 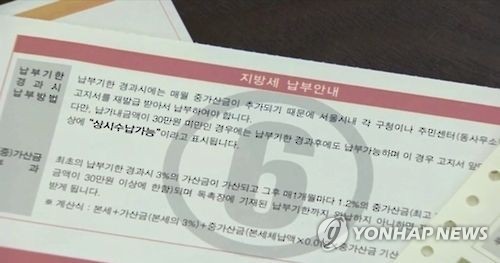 According to the ministry, the list includes 29,848 individuals whose unpaid taxes total 800.1 billion won. Also included in the list are 6,585 companies that have not paid 1.0745 trillion won in dues.

The government has revealed a list of habitual tax delinquents since 2006. Until last year, the list involved only those with delinquent taxes surpassing 30 million won.

The Myongji Educational Foundation, a Christian entity dedicated to education, topped the list with unpaid acquisition taxes tallied at 2.504 billion won. Also on the list is former President Chun Doo-hwan, who has failed to pay local taxes to the tune of 536 million won.

In terms of the amount of unpaid taxes, Seoul also topped the list with the total amount owed by its residents reaching 415.3 billion won, trailed by Gyeonggi Province with 321.8 billion and South Gyeongsang Province with 62.7 billion won. (Yonhap)