LG defeats Nexen in baseball postseason, sits one win from next round

The LG Twins defeated the Nexen Heroes 4-1 Sunday to move within one win of reaching the next playoff round in the Korea Baseball Organization (KBO).

Catcher Yoo Kang-nam hammered a two-run shot for his first postseason home run, and starter David Huff tossed seven strong innings in steady drizzle, as the Twins took a 2-1 series lead in the best-of-five first round action at Jamsil Stadium in Seoul. 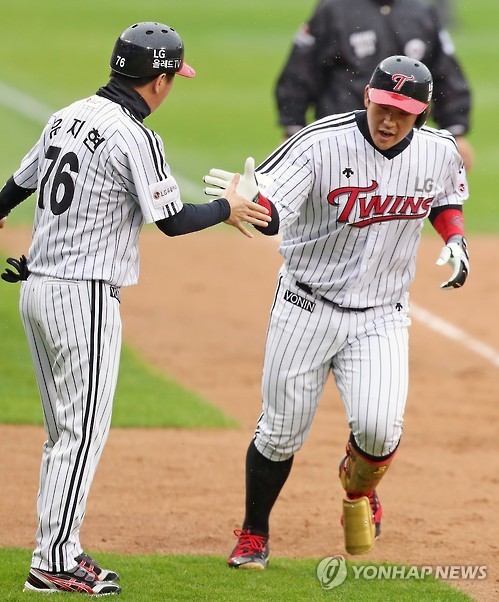 Both starters, LG's Huff and Nexen's Shin Jae-young, were on their game in early innings.

The Twins threatened first by putting two men on with two outs in the bottom second. Shin gave up a single and hit a batter, but got out of the jam by striking out Yoo Kang-nam.

Some poor baserunning killed another LG rally in the bottom third. With men at first and second and two outs, Luis Jimenez hit a chopper into the hole between third and short. Shortstop Kim Ha-seong made a fine diving grab, but couldn't get the force at second base.

Son Joo-in, running from second, overran the third base on the play. The second baseman then threw to third baseman Kim Ji-soo to start the rundown that nabbed Son.

The Twins finally broke through in the bottom fourth, as Yoo, No. 8 hitter, took Shin over the left field for a two-run blast. It was LG's first home run in this postseason.

The Heroes responded in the top fifth, with Kim Ji-soo delivering an RBI single. Lee Taek-keun, who hit a one-out double earlier in the inning, came home easily, but Kim was thrown out at second trying to stretch the hit into a double.

The Twins blew a golden opportunity to extend the lead in the bottom fifth. Two singles chased Shin from the game, and Park Ju-hyun walked the first batter he faced to load the bases. Park, however, got a grounder off the bat of Chae Eun-seong, and shortstop Kim Ha-seong threw to second for the force.

The Heroes stranded a tying run at third in the top seventh, as Huff struck out Kim Ji-soo to end the inning with the 2-1 LG lead intact.

The Twins capitalized on shaky Nexen defense to give themselves a chance to score twice in the bottom seventh. Kim Yong-eui led off with a single, and after Lee Chun-woong laid down a bunt, catcher Park Dong-won airmailed the throw to first base.

Now with men at second and third, Park Ju-hyun walked Park Yong-taik on four pitches to bring the double play into the equation.

New pitcher Lee Bo-geun snared a comeback line drive off the bat of Luis Jimenez, but walked Oh Ji-hwan to make it 3-1 LG. Yang Suk-hwan followed it up with an infield single that deflected off the leg of second baseman Seo Geon-chang and brought home another run for the Twins.

LG manager Yang Sang-moon said scoring first was the key to the victory.

"After Yoo Kang-nam's two-run home run, Huff was able to pitch comfortably," Yang said. "We will try not to lose our focus in Game 4. We're obviously in a good position, but we'll not let our guard down."

Huff held the Heroes to a run on five hits over seven innings.

He struck out three and walked one.

Shin, a 15-game winner in the regular season and a strong Rookie of the Year candidate, couldn't get out of the fifth inning in taking the loss. He was charged with two earned runs on seven hits in 4 2/3 innings.

Lim Jung-woo worked around a single and a walk in the ninth inning for the save.

The Twins will start right-hander Ryu Jae-kuk in Game 4. He carried a no-hitter into the sixth inning of the clinching wild card game against the Kia Tigers on Tuesday, and will pitch on five days' rest.

Ryu had the Heroes' number in the regular season. He was 3-1 with a 2.28 ERA in four starts, the most victories he had against any opponent in 2016.

The Heroes will go with right-hander Scott McGregor on three days' rest. He was the losing pitcher in Game 1 of this series on Thursday, after allowing four runs on five hits in five innings. He threw 76 pitches in that outing.