“Samsung is recommended to drop the Note brand as consumers may still find it dangerous even when the new Note 8 comes out,” Kim Duk-jin, the vice chief of private-run Korea-Insight Institute, told The Korea Herald.

The tech giant Tuesday decided to discontinue the phablets upon repeated incidents of it catching fire in different parts of the world. The suspension led the company Wednesday to revise its operating profit estimate for the third quarter down by 29.63 percent on-year to 5.2 trillion won ($ 4.6 billion). 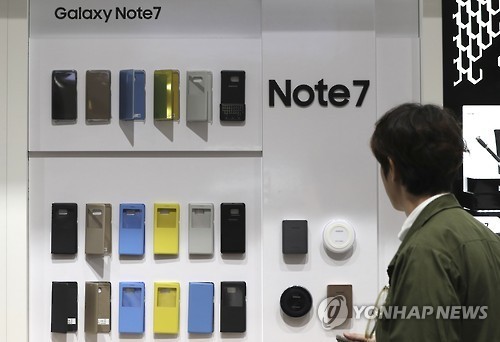 According to the institute, the perception of the Galaxy Note 7 has significantly changed over the past two months, even in Samsung’s home turf Korea.

Negative perception of the phone rose to 53 percent in October from 34 percent in August when the phone was first rolled out. Positive perception has dropped to 42 percent from 62 percent during the same period, according to the institute, citing local solutions firm Konan Technology which analyzes social network services.

Its brand reputation has also been hit hard globally as many airports issued notices banning passengers from carrying the Galaxy Note 7 onboard or in cargo, following dozens of reports of the fire-prone smartphones.

However, Samsung is likely to retain the Galaxy brand because the cost would be too high to rebuild another premium brand like Galaxy, which still has a high profile and loyalty globally, according to experts.

Lee Hae-hoon, a lawmaker of The Saenuri Party, said the halt in production of the Note 7 costs Samsung around 2.2 trillion won ($1.9 billion), adding, “Samsung appears to have given up the money to save the reputation of the Galaxy brand.”

The Galaxy series was first unveiled in 2010 after the production of Omnia -- which was known for bugs and low performance -- was discontinued.

At this point, the most critical move for Samsung is to find out the causes of the Note 7 explosions and restore trust in the market, experts said.

“Samsung should first accurately find out what led to the explosions and honestly disclose them to consumers. If the design was the problem, thorough investigation should be carried out before launching the Galaxy S8,” said Lee Byung-tae, a professor at KAIST’s College of Business.

Samsung’s new flagship smartphone Galaxy S8 is expected to be unveiled with drastic changes at the Mobile World Congress in February next year. The new phone is likely to adopt a bezel-less screen without a home button.

But this significant physical change may also lead to technical faults, as a bezel-less screen is more vulnerable to external shock and consumes more battery, which may also cause heating problems, experts said.

“As the hasty launch of the Galaxy Note 7 has been said to have contributed to the crisis this time, Samsung should not feel rushed to unveil new features for Galaxy S8,” an industry source said.