Samsung is expected to spend 1.2 trillion won (US$1.08 billion) to make up for the costs associated with the ongoing recall of the combustible Galaxy Note 7.

A market consensus for Samsung’s operating profit stands at 7.62 trillion won, up 3 percent from a year earlier, while the firm’s revenue is expected to come in at 50.85 trillion won, down 1.6 percent from the same period last year, according to research firm WISEfn. 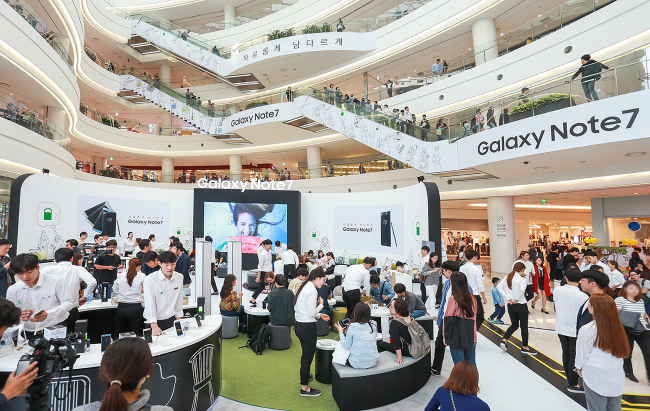 Riding positive initial momentum for its Galaxy Note 7 smartphone, Samsung was expected to post 8 trillion won in sales at first, but the estimate now seems to be a far-reaching goal as the tech firm is still struggling to pull itself back together from the recent crisis involving the Note 7’s explosive battery.

The firm’s display and device solutions businesses, however, will likely post strong earnings thanks to high demand for solid-state drives, 3-D NAND flash memory and the price rebound of DRAM chips.

LG, which failed to gain growth momentum with its G5 smartphone released in March in Korea, is expected to post 351.9 billion own operating profit in the third quarter, up 16.5 percent from a year earlier. It is expected to log 13.84 trillion won in revenue, down 1.4 percent from the same period last year.

As Samsung has recently resumed its sales for the Note 7 and LG’s high-end smartphone V20 has hit the local market, it needs to be seen whether they will be able to recuperate from their recent struggles.