During their meeting in Seoul in August, finance ministers of the two countries agreed to launch talks on resuming a currency swap line that had been closed last year. 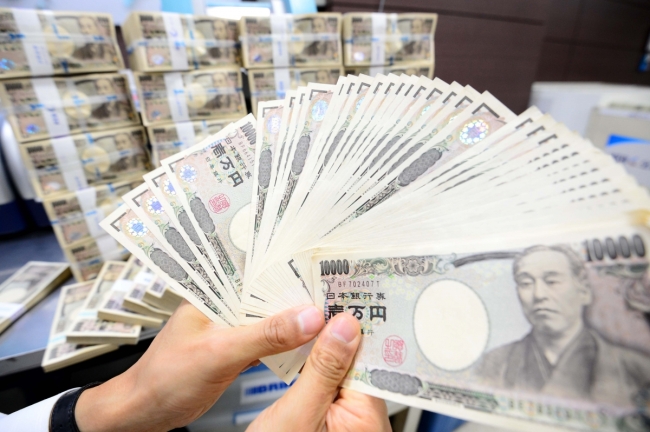 Korea and Japan signed their first swap deal worth $10 billion in 2001. The size of the swap arrangement between them expanded to $70 billion in 2011 before shrinking to $13 billion in 2012 and $10 billion in 2013 and being terminated altogether in February 2015 as bilateral ties became strained over historical and territorial issues.

Finance Ministry spokesperson Jung Moo-kyung said last week the size of the currency swap line to be reopened between Seoul and Tokyo has not yet been finalized as the two sides will continue to hold discussion on the specifics of the deal.

His statement came in response to a local daily’s report that a new swap arrangement between Korea and Japan will likely be worth more than $50 billion.

“The larger a currency swap deal with a foreign country, the better for us,” said the official, requesting anonymity.

Experts indicate Tokyo’s agreement on the resumption of the swap line comes as part of efforts to draw Seoul closer to it at a time when South Korea sees ties with China fraying over its decision to introduce an advanced US missile defense system.

Experts here expect Japan to seek to set the size of a new swap deal with South Korea at a level similar to that of the Seoul-Beijing currency arrangement, worth $54 billion.

When South Korea sought to expand currency swap deals with Japan and China to cope with the global financial crisis in 2008, then-Japanese Prime Minister Taro Aso, who currently serves as finance minister, reportedly told his aides that Tokyo’s arrangement with Seoul should not be a dollar short of the deal between Seoul and Beijing.

As a relatively small and open economy, however, the country remains vulnerable to changes in global economic conditions. Many experts are concerned over the impact of a possible US interest rate hike within this year on local financial and currency markets.

Reinstating the swap line with Japan would serve to reduce such a risk as the Japanese yen is considered a safe-haven asset, with the Bank of Japan keeping an unlimited currency swap arrangement with the US Federal Reserve.

Currently, Korea has swap deals with China, the United Arab Emirates, Indonesia, Malaysia and Australia, which combined are worth about $80 billion. Nearly 70 percent of the amount is arranged under an agreement with China, which is set to expire next year.

Experts note, however, these arrangements will hardly be instrumental in Korea securing additional reserves in US dollars, whereas the Japanese yen can be changed into the greenback anytime in global currency markets.

The resumption of a currency swap line would also help enhance economic partnership between Korea and Japan.

Prolonged diplomatic disputes have dampened bilateral trade and investment ties over the past years while both Korea and Japan have been struggling to reinvigorate their sluggish economies.

Data from the Korea International Trade Association showed Korea’s shipment of goods to Japan decreased by more than 20 percent from a year earlier to $25.6 billion last year, accounting for 4.9 percent of its exports, the lowest level ever. Accordingly, Japan was down one notch to the fifth-largest market for Korean exporters in 2015.

Japanese firms’ investment in Korea fell from $4.54 billion in 2012 to $1.65 billion in 2015, according to figures from the Ministry of Trade, Industry and Energy.

“An increase in the volume of trade with Japan would help ease Korean exporters’ heavy dependence on China,” said Kim Dae-jong, an economics professor at Sejong University in Seoul.

Views differ on the impact of closer economic ties between South Korea and Japan on Seoul’s relations with Beijing.

While some worry the relationship between South Korea and China may be further estranged, others expect Beijing to ease its stance to prevent Seoul from getting further away from it.