Over 900 caught smoking near subway entrances in a week

Since the Seoul municipal government launched a massive crackdown this month, 932 cases of violation have been reported, according to a report submitted to lawmaker Ahn Ho-young of the main opposition The Minjoo Party of Korea.

Those who committed the violations -- which happened at some 400 subway entrances in the cosmopolitan city -- were subject to fines of 89 million won ($81,000) in total during the cited period. 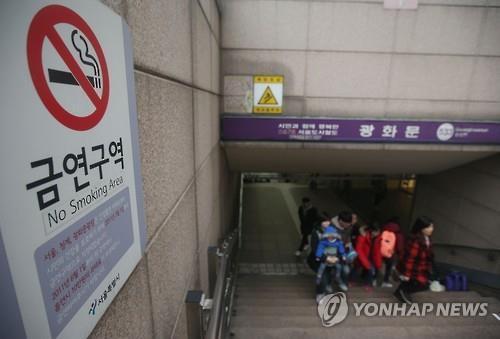 Daerim Station on Subway Line No. 2 and Line No. 7, had the highest number of violations, at 65, and 6.5 million won in fines were handed down in total.

This was followed by Changdong Station at the intersection of Line No. 1 and Line No. 4, and Jamsil Station near Lotte World.

The city had launched an anti-smoking policy in May and it went into effect as of Sept. 1. It conducted an intense campaign last month to discourage smoking in public areas.

Under the policy, district administrations impose fines on individuals caught smoking within 10 meters of a subway entrance, handing down a fine of up to 100,000 won per violation.