At a glance, her job prospects look bright. Besides a degree in business administration from a prestigious university in Seoul, she has a near perfect English score and Chinese language skills, as well as various overseas internship experiences.

“I could not get a job last spring (even) after being rejected 10 times,” Chung told The Korea Herald after sending applications to two conglomerates. “I cannot help but apply for random recruiters now to raise my chances of landing a job.”

Amid the tough job market, Chung is one of millions of job seekers struggling to find employment despite having seemingly sufficient qualifications.

A shortage of quality jobs for highly educated job seekers on the back of the continued economic downturn has pushed job seekers to state more credentials in their resumes to differentiate themselves.

The trend has coined a new term “spec,” which is short for “specifications,” referring to qualifications such as educational background, grades, English test score, volunteer activities and career experiences listed on a job candidate’s resume.

The conventional recruiting process at major companies demands job seekers submit application forms including photos, qualifications and personal statements. Only a handful of candidates successfully advance to the final rounds of interviews after thousands of applications are screened based on their specs.

“Now, everyone seems to have similar specs. I don’t know what else I can do to set myself apart from other candidates,” Chung said. “While focusing on filling my resume with all these credentials, I have less time to learn about companies and positions I apply for.”

As part of last-ditch efforts, Chung is now on a diet and takes profile pictures every six months, as she believes that the appearance of female job candidates matters in the hiring process.

“It takes at least a year to equip myself with all the specs, though I don’t think they are necessarily relevant to jobs I want,” said Park, referring to requirements that ask for certificates on one’s knowledge of Chinese characters or Korean history.

With the fierce competition among job seekers, young undergraduates like Park spend much of their time and money trying to gain these specs even when they are not necessarily relevant to jobs.

According to a survey on 569 job seekers by the job portal site Saramin this year, 71.7 percent of respondents thought that they lagged behind others in terms of their specs.

The survey showed that respondents have worked for unreasonably low-pay only to accumulate experience (39.9 percent), taken private education to prepare for job interviews and written tests (18.2 percent), acquired unusual certificates such as those for baristas (13.8 percent) and launched their own startups (13.4 percent) to boost their resumes.

Park also spent a year in the United States to study English and participate in an internship program, which cost him a huge amount of money and time. He postponed graduation to study for an upcoming test to qualify as an overseas project coordinator.

“As I grow older, while spending much time polishing my resumes, I fear that I might have less chances to land a job,” he said. “Without financial help from parents, it is really difficult to build up all the specs at a relatively young age.”

“Companies tell us to make our own life story, but only those who are affluent are able to accumulate enough experiences to create an appealing story, ” he said.

Yang Ji-hoon, who has worked in a human resources team for a publishing company in Seoul for nearly four years, pointed out that employers are not seeking excessive efforts to collect specs only to fill application forms.

“Companies cannot help but filter job candidates with quantitative measures such as an English test score (and) educational backgrounds,” he said. “But those with good specs are not necessarily competent employees in the field.”

According to the nation’s largest job portal site Saramin, the qualifications of job seekers registered on its website improved in 2015, compared to two years ago. Nearly 22 percent of the job candidates had internship experience last year, up 3.4 percent from 2013. Their English test TOEIC score also increased to 752 from 728, the survey said.

“It doesn’t matter how many specs they have. The specs should be relevant to jobs they apply for,” Yang said, citing examples of new employees leaving companies after failing to adjust to their jobs.

In South Korea, nearly 1 in 3 newly hired employees (27.7 percent) quit within a year, according to a 2016 survey on 306 firms by the Korea Employer’s Federation. The poll showed that 49.1 percent of them left work after failing to adapt to their companies, followed by those discontented with the pay and welfare (20 percent) and those unhappy with their work environment (15.9 percent) 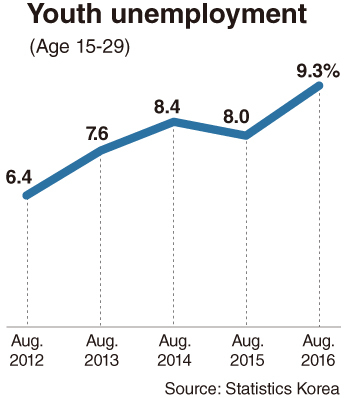 Amid mounting criticism against the economic and social costs of the spec-based recruiting system, a growing number of Korean companies have declared that they will not take into account such specs in the hiring process.

According to a 2015 survey by the Federation of the Korean Industries on 21 major conglomerates, 20 companies including Samsung, Hyundai Motor, SK and LG have deleted parts of application forms requiring personal information not related to jobs. Some 10 companies -- including Lotte, Posco and GS -- conducted a screening process after concealing information of job seekers’ universities and majors in application forms.

But job applicants said that such application systems put bigger pressure on them.

“I don’t really believe that (a) no-spec policy works in reality. A no-spec application system only makes me wonder what I should do to better distinguish myself from others,” said the student Park.

According to a survey by Saramin in 2015 on 439 job candidates, 79.7 percent of respondents said they felt more pressured about preparing for their applications after the “no-spec” application system surfaced.

As reasons behind the excessive competition among job seekers, experts cite companies’ spec-focused hiring system as well as a severe mismatch between highly educated job candidates’ expectations and available jobs.

“Without companies giving clear guidelines to evaluate job candidates, students tend to rely on collecting specs like certificates and language test scores so as not to lag behind other candidates,” said An Sang-jin, deputy director of the nonprofit group The World Without Worries About Shadow Education. “This is a huge waste of time and money for the society.”

“Korean students have focused on entering prestigious universities rather than pursuing vocational training because companies have discriminated against high school graduates or graduates from lesser-known universities in the hiring process,” he said. “There should be a legal ban on such discrimination to reduce unnecessary education costs.”

Despite a steady fall in the university entrance rate, 69.8 percent of high school graduates in South Korea still pursue higher education at four-year universities, according to the Education Ministry.

“When students are highly educated and qualified, they expect to hold high-paying, stable jobs,” said researcher Kim Yoo-bin at the Korea Labor Institute. “School systems should offer students a chance to explore their interests and careers, which will help lower the university admission rate and resolve the mismatch.”

The fundamental problem, however, lies in the structure of the country’s labor market, where there are widening gaps in the competitiveness between large and small companies and in the treatment of regular and non-regular workers.

Highly educated job seekers are reluctant to find work in irregular positions due to low mobility from non-regular to regular jobs, and to be employed at small and medium-sized enterprises amid worries over poor working conditions there.

The job seeker Chung also said that she would prefer to work for large companies or banks rather than SMEs. “Larger companies offer a higher salary and more stable working environment,” she said. “I want to stay in a job for a long time.”

According to the Small and Medium Business Administration, workers for SMEs took home 1.98 million won per month on average in the first half of this year, which was 61.6 percent that of employees at conglomerates who received an average of 5.15 million won.

“The disparity between conglomerates and SMEs in terms of working hours, wage and job stability should be reduced to curb the current job mismatch,” Kim said. “It is important for the government to decrease the level of financial assistance for conglomerates and focus on offering subsidies and tax benefits to SMEs for them to improve their working conditions.”

According to a survey on 11,155 SMEs released last year by the Ministry of Industry, Trade and Resources, 95.3 percent of the job vacancies were concentrated in companies with less than 500 employees.

Ban Ga-woon, a researcher at the Korea Research Institute for Vocational Education and Training, said that the high unemployment should not be seen as a result of individuals’ lack of efforts.

“The growing competition among job seekers should also not be viewed as a result of individuals’ greed,” he said. “As long as there are gaps between conglomerates and SMEs, regular workers and non-regular workers, men and women, job seekers will likely continue to compete to collect specs.”