After including the population of foreigners residing in Korea, the country’s population stood at around 51.07 million as of Nov.1, 2015, up 2.7 percent from the 49.71 million five years ago. 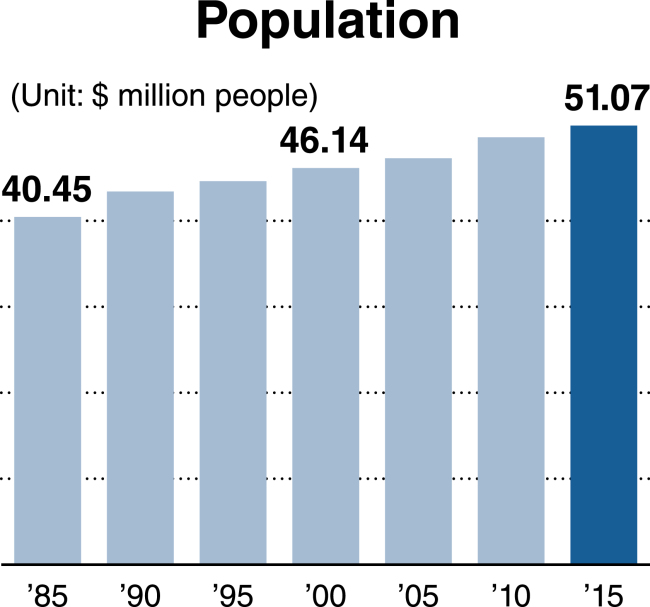 The number of foreigners in Korea also surpassed 1 million for the first time, reaching 1.36 million and accounting for around 2.7 percent of the total population, the statistics office’s survey showed. It increased more than 41 percent from five years ago.

It said that the country’s population has been growing 0.5 percent on average a year since 2010, entering the range of 50 million residents. It took 30 years for Korea’s population to reach 50 million from 1985 when the population reached 40 million.

However, the survey showed that almost 50 percent of the population lived in Seoul and Gyeonggi Province, raising concerns of overdensity in the region, while the rest of the areas suffer from low growth in population.

In addition to a rapid increase in the population of elders aged over 65 in Korea, the number of single households have also climbed, accounting for about 27 percent of the total population. Five years ago, the proportion was 24 percent.

“An increase in women joining the workforce and college graduates living alone contributed to the rise in single households,” a Statistics Korea official said.

Also, the number of elders over 65 reached 6.57 million, accounting for 13.2 percent of the total population, up from the 5.36 million five years ago.

South Jeolla Province marked the first region to become a hyper-aging society as its proportion of elders over 65 surpassed 21 percent of its population.

The Bank of Korea and the Organization for Economic Cooperation and Development urged the government to come up with a better policy to deal with Korea’s aging population and low birth rate.

“The country will start to see its working-age population decrease next year amid an aging society, which immediately calls for diverse measures,” BOK Gov. Lee Ju-yeol said last month.

“The government may have put some effort into it, but it does not seem to be sufficient.”