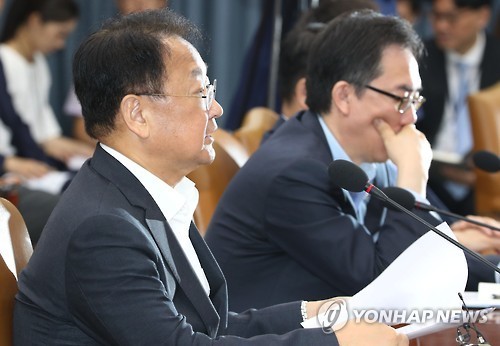 “Looking ahead, the Federal Open Market Committee expects moderate growth in real gross domestic product, additional strengthening in the labor market, and inflation rising to 2 percent over the next few years,” Yellen said in her speech at the symposium on Aug. 26.

“Based on this economic outlook, the FOMC continues to anticipate that gradual increases in the federal funds rate will be appropriate over time to achieve and sustain employment and inflation near our statutory objectives.”

Although the two key monetary policymakers did not mention when it would exactly raise its rate, they left open the possibility that it could be sooner than the market can expect.

Korea is already responding with stocks and the won bracing for further depreciation, and the Finance Ministry seeking to resume a currency swap with Japan, the world’s third largest economy to get a hold of more dollars to stabilize and buffer the market from the impact of a rate rise.

There are mixed analyses with some analysts saying the Fed might hold off its rate hike until December since the inflation rate is well under its annual 2 percent target, with productivity still low. Others say the central bank could actually raise it twice in September and December given its positive economic outlook and employment.

“We see the possibility of the US rate hike in December, should the number of jobs not increase by more than 200,000 in August from the month before,” said Lee Sang-jae, an economist at Eugene Investment & Securities, noting that the job data will be out early September.

The US saw its jobs increase by 273,000 on average per month from June-July, with an unemployment rate of about 5 percent. But the world’s largest economy relied on domestic consumption for growth with private investment and exports remaining weak.

Some analysts weighed more on the possibility of a rate increase next month as the central bank does not want to shake the market during the US presidential election.

However, Fed Vice Chair Fischer told CNBC that the central bank will look at its data when it comes to deciding whether to raise the interest rate, not the political landscape, indicating that the US presidential election will not be considered in its rate decision-making.

“We‘re reasonably close to what is thought of as full employment. Inflation rate this year is higher than last year’s. It‘s still not up to 2 percent. But it’s been growing,” Fischer said in the interview.

“We are going to look at economic signals. We‘re not going to be political forecasters.”

Analysts say Asia’s fourth largest economy may have to absorb the short-term impact of the US rate hike, at the same time wait for the effect of fiscal stimulus and monetary easing on the market.

“The BOK’s interest rate cut in June (to 1.25 percent) will take time to boost demand, and the near term outlook is for little change in headline inflation,” Moody’s Analytics said in a report.