By Park Hyung-ki
Published : Aug 26, 2016 - 16:55       Updated : Aug 26, 2016 - 16:55
Fitch Ratings continued to warn South Korea of geopolitical risks associated with North Korea in the light of the North’s recent submarine missile test, in addition to structural risks on changing demographics and low productivity, according to the Finance Ministry on Friday.

The Fitch delegation visited Korea for its annual consultation meetings with the Finance Ministry from Wednesday-Friday this week. 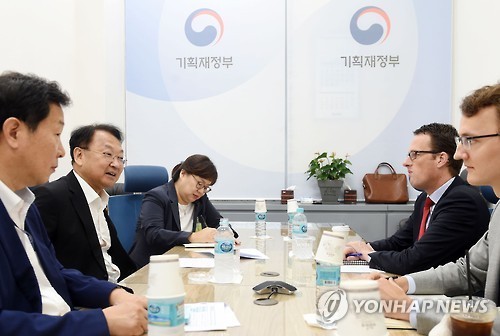 Although the global ratings agency gave a positive review on Korea maintaining fiscal soundness and its efforts for structural reform, it reminded the government of these risks that could undermine its economic potential.

In February this year, Fitch viewed Korea’s outlook to be stable as the country has a strong macroeconomic policy, but cited “tense relationship” between the two Koreas as a risk, along with a rapidly aging society and a slowdown in China.

“Korea‘s macroeconomic performance is strong, even though it is challenged in the longer run by fast population ageing and low productivity growth,” Fitch said in a statement.

“The Korean economy is vulnerable, nonetheless, to an external demand shock, for example, in the context of a more severe slowdown of the Chinese economy than expected.”

Moody’s is also expected to assess Korea in early September. It upgraded Korea’s issuer and bond ratings to Aa2 from Aa3, while changing its outlook to stable from positive last December.