By Park Hyung-ki
Published : Aug 24, 2016 - 16:42       Updated : Aug 24, 2016 - 17:58
With political parties growing further apart over their inability to compromise on the South Korean government’s extra budget bill, the Finance Ministry is making a last-ditch effort to appeal to lawmakers before time slips away.

Once again urging the conservatives and progressives to sign on its supplementary budget, Finance Minister Yoo Il-ho said Wednesday that if the country misses the “golden time” to carry out its 11 trillion won ($10 billion) extra spending plan over the next four months, the economy will not only underperform its growth forecast, but also thousands of jobs will be at stake. 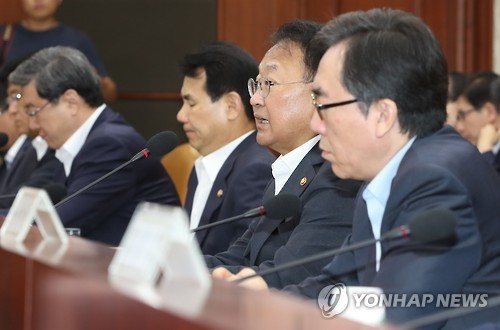 “The budget needs to be executed over the next four months,” Yoo told ruling Saenuri Party lawmakers in Seoul on Wednesday, adding that the government has to start allocating extra funds before the Korean Thanksgiving holiday next month.

If it misses this timeframe, a number of state projects -- including welfare and job creations -- will come to a halt, the finance minister stressed.

In an independent analysis by the National Assembly Budget Office, it said that when it comes to extra budget execution, “timing is everything.”

The 11 trillion won budget will be able to boost economic growth by about 0.13 percentage points and create 27,000 jobs in the second half of this year, should the government execute more than 50 percent of its extra spending plan in the third quarter.

If it falls below 50 percent, the country will mostly likely see the effects diminish, the Budget Office reported.

“In order to see the effects of economic growth and job creation, the country needs to rapidly allocate and execute its extra spending,” the NABO said in a report.

Also, it added that the extra budget could further help create about 45,000 jobs in 2017 after executing all of the extra budget by the end of this year. The Budget Office projects Korea to grow 2.6 percent this year, below the central bank’s 2.7 percent and the Finance Ministry’s 2.8 percent.

The extra budget bill is currently facing deadlock as Saenuri and the main opposition and progressive Minjoo Party of Korea were not able to reach an agreement on a number of issues ranging from regional financing and welfare.

The budget negotiations recently hit a snag especially after both parties failed to agree on ways to set up a National Assembly hearing to uncover the government’s financial role in salvaging the shipbuilding industry, particularly debt-laden Daewoo Shipbuilding & Marine Engineering.

This disagreement led the opposition party to boycott the budget talks, missing the Finance Ministry’s initial timeline to get the bill passed by mid-August.